Easter Bunny Moves His Schtick To Next Week 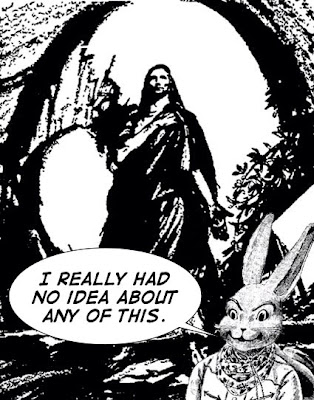 This is going to take a lot of kids by surprise, since it will be the first Easter without eggs, but we finally got it taken care of. We've heard the complaints for years about the Easter Bunny screwing with "the true meaning of Easter," by getting it mixed up with candy eggs, and, our personal favorite, solid milk chocolate idols of himself.

Welcome to the first Easter without the Easter Bunny! We got it accomplished, and it wasn't that hard; he's a reasonable guy, and once he heard the issue explained, he was more than willing to compromise. It's kind of odd, I think, but he's operated with a whole different way of thinking. He wasn't even aware of the issue. Somehow he'd never heard the story of Jesus, his death and being raised from the dead.

I know when someone is lying, and the Easter Bunny was really on the level! So I'm busy sketching it out for him, the basic story. Then I'm backing it up a bit and giving him the whole background, just whose death and resurrection he's been messing with. And I could see his furry forehead start to moisten; his agitation was real. He was even afraid, looking up, like he expected a lightning bolt at any moment.

At that point, I had to handle it carefully. Were I to be callous in the face of his extraordinary ignorance, he might completely go over to the dark side and turn Easter into a heretical grudge match. If his soul were to be damned, without grace and hope, then why not! I comforted him, letting him know the purpose of the Lord's work, that he might be forgiven and have new life.

What an important discovery! "All these years I always sensed there was something else going on, but what? Who do you ask? I just figured, everyone seems fairly cool, so I kept doing my thing. Now, though, looking back, I was blind, but now I see!"

I helped him along, as he saw his quandary. He doesn't want to screw with religion, but what about the kids? They love him! "When could I share my eggs and candy?" he asked. We looked at the calendar and I said, "What about next week?" There's nothing next week. Jesus gets raised today, and by tomorrow it's all over. Next week is nothing. "Do it next week! Then we'll have two special days!"

So from now on, that's what's going to happen. Easter will be reserved for spiritual meditation and whatever. But the Sunday after will be given over to the fun and excitement of the Easter Bunny bringing all the tasty treats we've forever known and enjoyed!

But he wondered again about the kids, really, how would they take it?

I explained that, yes, it's going to come as a shock today, but I don't think they'll be too disappointed. It's just one more week, and it'll give them something to look forward to, a whole Sunday for eating candy and getting sick! The anticipation will be fun in its own way, as they count down the days. Then it's here!

"Yes!" the Easter Bunny said, doing a happy dance to match his spirit. "They can get the resurrection of the Lord out of the way today, then they'll have the whole week to look forward to the goodies I'll bring! They'll like that very much!"
Posted by dbkundalini at 6:41 AM