Foreigners Are A Little Too Foreign 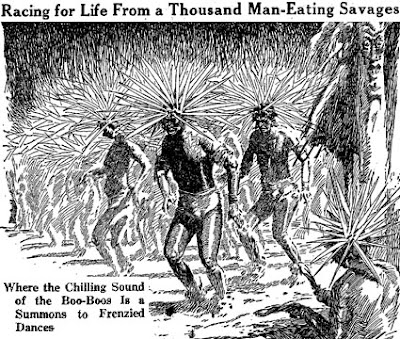 I was at a meeting the other day (absolutely true story, my hand's up), where the supposed benefits of foreign travel were set forth. The guy had been to Africa, and in his life, Pago Pago, Timbuktu, Europe, and probably Copacabana. And he had a display of rough handmade trinkets to prove it!

I sat there respectfully, for the most part, only clearing my throat and shifting uneasily in my chair a couple times for effect. As I watched his slides, replete with straw huts, shrunken heads, headdresses, nose-bones, and bare-breasted women, and everyone living in close proximity to trees, I felt a little queasy. But I was thankful, thankful that I'm not a foreigner! 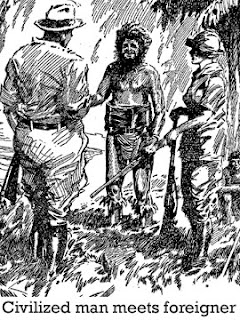 I don't know how many of you have been to a foreign country. I actually have not been anywhere but right here on home soil, the homeland. Not even Canada. And certainly not Mexico -- God forbid. You can't even drink foreign water.

It always turned me off, what we used to hear about foreigners, and even now I feel the same revulsion at how they do things that are basically crazy. Such as the things they eat. Human flesh is of course the worst thing. But even the stuff we might consider better is still stuff they're fighting monkeys and anteaters for.

Foreigners. Even the word has a foreign sound to it. Because that's what they are, the other, something or someone apart from civilization. They're out there doing their thing, more or less one with nature. Nature as it was lived by primal man thousands of years ago. Nudity is natural. It's still how we're born. But in their case, it's also how they stayed! They're closer to nature in that.

One tribe of foreigners I saw on TV -- and it's an image that's seared in my memory, regrettably -- had big long sticks on their penises, like maybe 18 inches long, with something, maybe a string hooked to a counterbalance behind their ass to keep it erect. I saw that and spit my drink, "No! Don't tell me!" I fell to the floor laughing, and the ridiculousness of it all still makes me chuckle, after all this time.

I don't see any penis sticks in my top picture. But there's plenty of sharp erect dealyboppers on their heads. And I love the caption! "The chilling sound of the Boo-Boos!" You get poked with one of those spikes and you'll have a Boo-Boo! LOL. But for them it's "a summons to frenzied dances." If they go at it too hard, someone's going to lose an eye! Myself, I wouldn't approach to within 50 feet of that, let alone dance barefoot in such a crazy crowd!

And look at the other picture. Our civilized man is shaking hands with the foreigner, who's obviously sizing him up for a meal. But such plans could be hasty and premature, as we see that we're armed and ready to defend ourselves. The situation is clearly perceived to be potentially dire, as even the lady is armed. But it looks, amazingly, like the savage is armed as well, meaning it's more dangerous than I'd like, since I'm thinking he stole the gun from one of our guys, possibly his breakfast.

You noticed I called the foreigner a savage. Yes, I realize nowadays that's usually thought of as a politically incorrect word. But I feel we can use it anyway, especially when we reflect on its meaning. Since they are savages, we may as well call them that. And they don't know what we're talking about anyway. To them "boog-uh-de-boo" is a word. They're babbling gibberish, so of course they're not going to be real offended. And even if they are, it probably wouldn't take a lot of persuasion and they'd agree, they are pretty wild.

No, my friends, I'll leave the rest of the world to you. I'm happy right here! I seriously don't want to deal with foreigners!
Posted by dbkundalini at 8:27 PM