Am I A Quitter? 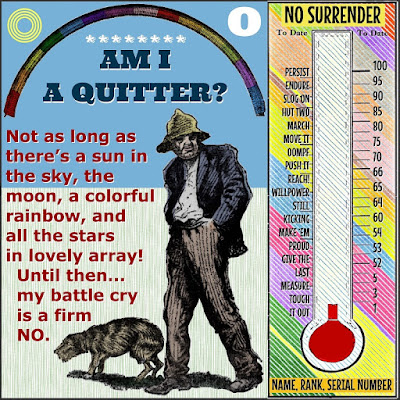 The whole pathway you and I have taken this month, striving for and hitting so many of our goals, with the greater goal still in sight, has been marked by many up and downs. Which, if I may draw a lesson that no one else has ever thought of, is also the story of life.

But we're not focused on that today. Today we’re answering the question “Am I a Quitter?” And the answer is no. We’re not worrying about the downside, we’re merely stating it, because Victory is in sight! And even if it weren’t, our resolve remains as resolute as any resolution I’ve ever made. And the idea of quitting now -- while probably not as foolish as it sounds -- is not in my armor-clad bullet-resistant bacon-scented nature.

Remember how I’ve gone on about some of the kids in the neighborhood taunting me? They’re like a sad Greek chorus, one note gloomy gusses. Let me prophesy something about them, and this isn’t my word, it’s straight from my gut: “These kids will get theirs! And it won’t be parades and cotton candy, more like fire and brimstone, the worst of the worst, divine switches on bare hide, and the embarrassment that goes with it.” So many of you have written in that you like it when I take these kids to task. So that’s exactly what I like to give you! Curses on their heads, curses on their tails, may their parents die childless! Petless! Twitching and babbling, not even a bottle of hootch to find wet comfort in! Foaming at the mouth...

You like that? You do? I knew it! Let me reach down in my deepest bowels of disparagement and see what else I can say, give a fresh spin to old taunts, perhaps. Well, you know I’m in the Big City now, and somehow these neighbor kids know all the main blogs online. And they were in the street yesterday with their jump ropes, basketballs, and street chalk. They were taunting me, and I looked down and saw a chalk image that was supposed to look like me, and an arrow pointing at my house. Made me look like a Cyclops with one big ugly tooth and fire flaming out of my nose. Which made me sick!

It’s hard for me to believe these kids — ranging from 4 to 16 — that have this knowledge of the world’s blogs, wouldn't use it to some good, like day-trading or real estate, aspirations for their future. They’re obviously not dummies. But they use their talents only for nastiness. This is no exaggeration. They’re the same kids who just happened to find the bloated body of another blogger in the river. It said in the paper that “someone” was taunting him prior to him wading into the river, yelling, “Your blog sucks!” And, true, it really wasn’t too good. His best post was on locating your mate’s love-handles. You don’t need a blog to do that.

I wish he were still alive. For his own sake, of course. But also to take the heat off me, since these kids just naturally need someone to taunt. Maybe if we’d talked more, I could’ve taken the heat off him and he off me. He wasn’t a bad guy, but is love-handles something we have trouble finding? It’s one of the first things I see.

So am I a quitter? Has the sun quit? Is the sky still there? The moon and the rainbows, do they quit? The moon, no. Rainbows, yes, rainbows quit fast, bad example. The sun and stars, they’re still in the sky. I watch YouTube videos about the stars and experts have come to the conclusion that for the most part stars are there. Once in a while one gets destroyed.
Posted by dbkundalini at 6:44 AM