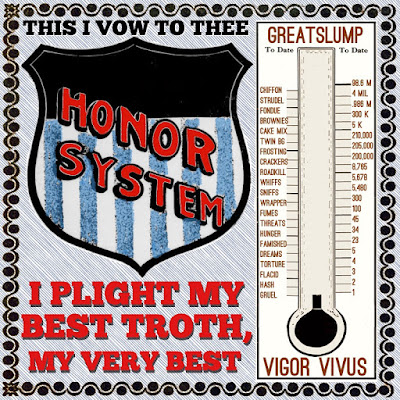 I’m having a hard time starting this post, my eyes are transfixed by the beautiful shield of the Honor System. First, because who even knew the Honor System had a shield? It came as a surprise to me when I first saw it years ago. And I never knew who came up with it. Whoever it was, thumbs up. Because that’s the system I operate by.

I hear lots of guys of apparent honor say their word is their bond, but do you ever see them hold up the shield? I’ve never seen that, never. Not that I think it’s absolutely necessary. I’ve known lots of people of honor who maybe didn’t know about the shield. And so were content to grind it under foot in the dust, unknowing, uncaring. But they were still true to their word, with all the honor you’d want.

That’s the way I function, too. Like in the movies: “Sheeeelds? We don’t need no steeeenking sheeeeelds!” It’s true, and the same thing goes for flags. All a flag's is is shorthand for "That represents us." You can be a skunk and fly the flag. But have you ever heard of taking a knee before the Honor Shield? Hasn't been done. Why? Because people know in their marrow, their core, the Honor Shield is a holy, sacred thing that would immediately explode in your face if you dared try. Properly rigged. Whereas a weak flag lies there like a dishtowel, disgusting.

This I vow to thee, Honor System: I plight my best troth, my very best. With Vigor Vivus as the spiritual principle of the good things of a life well-lived, vigor in all you honor and offer. And Vivus also means something.

I’m such a serious person on these high flown values, I remind me of my dad. He went out addressing clubs and places, like the Valor in Excelsis Club. Maybe someday I can do that. I could put my good values out there against anyone's, run 'em up the Honor System pole and see who salutes. Of course it’s easier to keep to myself and never venture out. I could be lazy. I also don’t like listening to opinions I disagree with, but I'll stand up for my right to walk away and let someone else endure them.

We’re still near the beginning of this great push, calling attention to my blog and hoping to get more readers, readers who will engage me and others, who will debate the great matters discussed here. Then gladly adhere to my opinions and proudly march forth in absolute lockstep. The only debate I would allow is: Should we dispense with the Latin phrase "Vigor Vivus" and use a contemporary equivalent? I like the pageantry and zip of the Latin, but I suppose "Strong Persistent Enduring Spirit for Living and Life" would be just as catchy.

I have a particular personal cudgel that I want to be pushing at some point. Do you read world blogs? I do keep up with around 1,000 blogs. It is, in fact, so many that I have no attention to give to very many of them. So I couldn’t tell you ABC about very many. But there’s a few I have my eye on, the ones written by Pastun tribes and Iraqi herdsmen. Of course they have dominance in their part of the world, and they do a great work for their audience. I laud them in every way. But I'm extremely jealous of their influence and I want that same influence here.

Ask yourself, Is it really right that I should suffer in silence, when I just got done proclaiming my love for the Shield of the Honor System? On my honor, folks, the present situation cannot stand. Hence, this thermometer system. I need more, more, more -- more continents, more countries, planets, more and deeper influence on the state of world discourse. And for that, I’m asking you, please do your part, again, on your honor to make it happen.