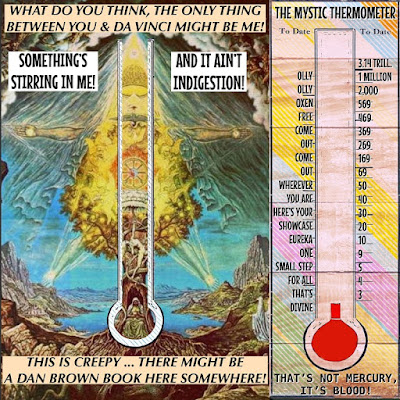 There was a rumor, fleeting though it was, that I was a quitter. Which I immediately denied. How could anyone think I’d quit now, going on a month into the thermometer drive? If I was going to quit, it would’ve been the first week, not now. Even if I didn’t feel it at this point, I’d at least fake it. I don’t drive somewhere just to turn around at the edge of town. Sheesh, whoever is saying that — I think I might know the guy spreading these rumors — just back off, cease, desist, quit while you’re ahead. But today's a day for happiness, not getting even.

The other reason I would never quit, even say it was a week ago, is because this thermometer thing is a real soul thing. Probably what a whale thinks when it’s swimming the world’s seas. The deepest seas to the whale are a piece of cake. It’s not easily frightened of drowning even though they’re not fish but mammals. You could have the biggest man in the world, an eight-foot giant. And if you threw him in the ocean he’d be scared to death. Not a whale.

And not me. Because something’s stirring in me that’s beyond me and yet part of me. Think of it as the highest realization, that I am the whale, I am the thermometer. It’s funny, one of my biggest fears when my mother would take my temperature was the thermometer. I be lying there in bed and thinking, "I might bite the thermometer in half and die of cuts," or "I might swallow the thermometer, gulp, or I’d be so hot the thermometer would blow its end off (like in cartoons), and it’d get in my eyes and I’d go blind." But now I’ve come full circle, being myself one with the thermometer.

There’s a possible world religion in the making here, folks! Where someday people could be going door to door with leaflets and invitations. Telling people how the inner mercury, the inner sap is always rising or falling. With the thermometer telling your temperature in that sense, You’re hot blooded, check it and see, or you’re cold as ice and someday you’ll have to pay the price.  I always heard we were warm-blooded, which again is also true of the whale. But the mystical reality speaks of not being lukewarm but hot or cold, or being spat out of its mouth...

The lesson about has to be: Be the best cold or the best hot you can be, no in between. And it’s true, we always remember the times we're absolutely cold or hot. I almost froze to death one time, with the weirdest thing happening; at the time I became extremely warm and still knew I’d die of frostbite. So I got up and I ran, I ran so far from there, till I was home, safe in my own bed, warm again. My mom came and asked me what happened. I was out of my mind, not knowing the future, but my exact words were, “Look to the Mystic Thermometer, Mother.” She was freaked out because I always said mom or momma till that day!

Now today is here. Friends. And while it is called today, that is when you must choose. Will you like this blog, subscribe, and/or comment? Will you go the full measure as I have? Will you found a men’s division in your efforts? Will you found a ladies aid group as well? Will you alternately find yourself paranoid, pulling up the blankets lest the world encroach? Or will you find in yourself absolute confidence, casting off your many blankets and shouting it to the world?

Those two scenarios show what your mercury, your sap, the juice in your blessed marrow is doing. Up or down. But it doesn’t go horizontal. You go horizontal, out into the world with the good news of this blog, only when the Mystic Thermometer climbs for the sky. Or you shy away from that horizontal move when instead of climbing for the sky it digs a hole, crawls in, and covers itself in the blessed soil of death, then using whatever strength it has left (and in the absence of air) to dig itself farther and farther below. In all my days I’ve never heard of it burrowing very deeply. It gets a few feet down, let’s say, then reaches around itself, huddles tightly and dies.

Don’t let that happen, unless you are completely without sense.
Posted by dbkundalini at 6:20 AM