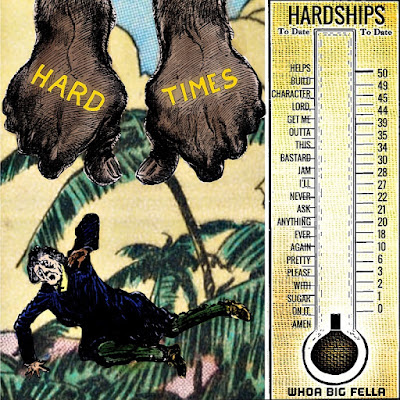 It’s lately been a hard slog, hard times all around. But I’m not complaining, just trying to cut myself through the thicket, hoping very soon for a clearing, at least the ability to see the light of day and smell something besides the stifling air of jungle fauna gone bad, symbolically.

I’m keeping my mood as best as I can, which is tough in good times. And reminding myself of the various sayings and old family coaching techniques for when you’re discouraged. 'You can’t make a mud pie without a little rain. Every ape has his day. That tree won't climb itself. If you’re not bigger than your challenges, you’re too small. Pass the meat and don’t sniff it first.' That’s a good one from my memories; I had to smile; my brothers’ biggest fear was that someone would sniff their food. But what if I sniffed it and didn’t tell them? Such dirty little rats we were!

Hey, a smile! Here in the deepest jungle, surrounded by every challenge. Reminds me of the book “Head Hunters of the Amazon.” We think of Amazon as a big company, and that’s true. But, little known fact, it's also a river in South America...you're welcome. You might not believe it, but I always wanted to go to the Amazon. Notice the past tense. I don’t want to go there anymore. For one, it’s enormous. Two, the head hunters. Three, drug overlords. Four, enough mosquitoes and vermin to suck you dry in a second, if the drug overlords don’t get you first. In short, while I love South America as a continent, and hope everyone there likes my blog, subscribes or whatever (“Let’s blow them thermometers, South America!), I could never go there. Too wild for my domesticated blood.

But I do compare my problems to jungles and King Kong creatures run amok, and being so scared, so terrified I’m out of my mind with panic just thinking of it. Just today a few of my Rent-an-Associates and a few of the true believers (the men’s division as as well as the women’s auxiliary, the Ladies Aid) were coming to me with complications. Traffic from our reporting centers was slow. We were afraid it was being stymied upstream somewhere by Pashtun and Iraqi blogging competition. And as for the Ladies Aid, two of their washboards were nearly scratched beyond repair. Thank God we still had a pint of elbow grease, so the ladies are once again in the pleasant pink. So many problems at once. And that’s what always puts me in a stew and leaves me crawling for bed!

You should know I never did that great in school. I may fancy myself a brainiac in my old age, but don't ask me anything. In school I (even I!) was an average student. One, I didn’t like to do homework. I’d leave it till later and by then we’d run out of later. Two, I thought they had it in for me, from the devious principals all the way down to the devious teachers. But it surely wasn’t jealousy on their part. What would they have to be jealous of, a kid that didn’t know shit from Shinola? And wasn’t afraid to admit it, if only he had the vocabulary to do so. I would sit there and blubber, duh duh duh. And the only consolation I had was knowing a few other kids were dumber yet.

So I'm dumb about a lot of things, but smart about a few things too. Here's a thought piece: If the earth once was one continent, Pangea, why did the North American continent luck out and remain free of King Kong type monsters? Or is that what Bigfoot is, just a shrimpier version of his larger brother? That's pretty good thinking...just proved Bigfoot.

P.S. There's probably some tie-in with The Great Ape and this present abomination.
Posted by dbkundalini at 6:42 AM