The Three Stages of Me 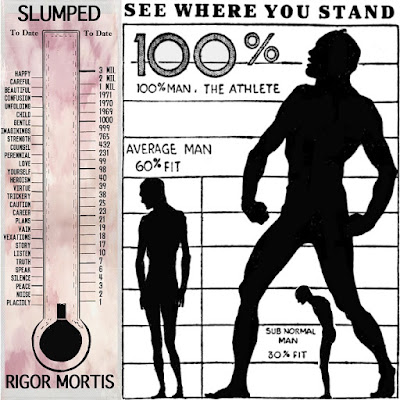 Sorry to immediately personalize the chart, but “Been There, Done That...” I started off the proverbial 98-pound weakling, grew into a fitter specimen, then hit the magical status of 100%. And what a moment it was. I tossed confetti till noon. Then ate a cow. For a while I even thought that was as good as it got, then I heard about 150% and 200% also being actual numbers and went for it. And it wasn’t really hard; if you can hit 100% everything beyond that's a piece of cake.

Because you can go from Scrawny directly to Brawny, I put those together in one panel. But most guys, let’s call them Average Man, get fed up with what can become a constant struggle when they’re around 57% fit, and start thinking, “If I get to 60% that’s good enough, my goal's average, I'll slip into the middle of the pack. And it’s true, you can, which is why it's called Average.

It’s only the few — small guys like me and guys much larger — who say, No, I’m going for 100%, then the sky’s the limit. I won't be held down by gravity! I will soar into the skies of fitness, physically, mentally, psychologically, with stamina to spare, brawniness to boot, in every way tough, tougher, and toughest. Shoe leather's got nothing on me. Nothing can hold me down. I shall not be bound.

And I won't be musclebound either, one of these guys so thick in muscles and head they put you in tire commercials. Instead, I'll be smart and wise, with a mind like a computer that’s reliable and doesn’t have to be continually rebooted with updates and still shows unknown errors. People talk to me and I respond by squeaking and clicking as I perform calculations and spit out answers: "Mr. Knowledge, what is the secret of everlasting life?" Answer: If you're smart enough to ask, you're smart enough to know.

I say the secret of everlasting life is Vigor Vivus and kicking ass. But you can be stuck in its opposite, Rigor Mortis, while in the best of health. Yes, yes, I know what you’re thinking, another Vigor Vivus message from Mr. Know-it-All. Please spare me! OK, but I've seen enough guys sink away and vanish; you may as well survive. Because it's true, Vigor Vivus is the spirit of life, that we're born with but fritter away by our lack of attention to the inner slob.

And Rigor Mortis is its constant counterpart. You settle for Rigor Mortis, pretty soon you think that's all there is; you’re hard as a rock, then softened like chaff, till that disintegrates and you’re a pile of dust. Whereas Vigor Vivus, when that’s your spirit, you puff out in confidence, you bulk up mentally/spiritually, you're a multidimensional success, and finally you hulk out and reign over all enemies. Just be careful, though, when you "arrive," because delusions come in pretty packages.

There’s only one thing about hulking out and reigning I don’t like: so often I have to do it alone, which is lonely. I was out with some other poor guys in the Big City, looking for cans. I had about a 12-pack box full, and another guy had a Hefty sack full. But he had Rigor Mortis like you wouldn't believe, sadly making him the poorest man in town. He died under the bridge, leaving me great memories and about 65 cans.

Bad news for that guy, but his piss-poor end is great news for you, what you can avoid. This blog is open to all. But if you never felt welcome, that was your own psyche excluding you. Even before I plastered the place with thermometers, you were welcome. The thermometer drive is meant to put all misconceptions in the past. We are explicitly telling you, You are welcome, whether you’re 60, 100, or more in percent. Hell, if you’re 30%, 20, 10, 5, get with it. If you’re literally a pile of dust looking for the next hint of a breeze, as long as you are at least a few specks of dust with some semblance of coherence, that's better than nothing. You can reach out and we promise to keep the breeze down where you are. And whisper to you occasionally, "You still there? Come on, Dusty, start clumping."

We’re forever discussing the issues that can help you. Whether it’s bettering your best (obviously one of my personal favorites) or having at least something and adding a few more specks to your collection of dust with the hope that you'll build and grow, advancing perhaps to a leg, an arm, anything beyond the little you are now, we're here for you.
Posted by dbkundalini at 8:00 AM