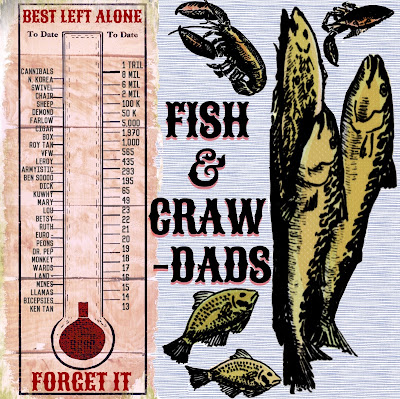 Something important to all of us these days is our opinion. We're overcome with opinions, clearly. I'm of the opinion people are wacko crazy, not knowing what's good for them. But just wait. Evolution, and its more immediate cousin, Mortality, will take care of it. Just you wait...

In the meantime, Fish and Crawdads is the answer, keeping the two separate, but knowing they go together. You want Fish, you need Crawdads, you need Crawdads to get Fish. We used to catch Crawdads and keep tubs of them in the shade of our bigger maple tree. They were happy, they couldn't get out, and they did their job, catching Fish. Which we ate.

Fish and Crawdads of course both have the meat of the goodie and the refuse of the baddie. (A term I just coined to have an opposite to goodie.) The meat of the Fish you prepare for meals, the baddie you discard, guts, heads, scales. On the Crawdad, the meat is a small white piece under the tail, big to the Crawdad but small compared to the baddie. And some of them go full King Kong with baddie, enormous claws and heads, then down to, at best, an above average goodie.

Now, these days, your opinion can be the most cantankerous part of yourself. We can stand your loud grating voice, as long as you're paying dues, but if you can't stifle the a-hole opinions, it might get you killed. I personally don’t know very many people who’ve gotten killed for their opinions. If I knew of one, that's someone I wouldn't have had much to do with in the first place. My opinion, Steer clear of certain death!

What we’re concerned with these days is the blog, keeping it healthy, keeping track of it with these great thermometers -- boxes and boxes of beautiful thermometers -- and seeking its survival and prosperity in a world of readers who frankly don’t know their digestion outlet from a hole in the ground. Let alone what to do with it, although I suppose everyone has the basics of that down by simple nature. One important clue, it's not for cucumbers. So we've got that much, but what we haven’t all got is an understanding of the process scientifically. A baby has the diaper strapped on but has no clue what for.

As this great effort goes forth -- filling thermometers, not diapers -- we shall do it in a similar spirit. Doing our best along the way, not worrying too much, and not even trying to understand the steps. Just doing it and worrying about the results when we clean up. But one thing of huge importance is not getting down in the dirt with these bastards and their crazy opinions! Because it'd only spring back on us. So we need a signal. Some bastard shows up, we whistle. That's the signal. Then when we're mostly out of view, twirl your finger by your ear. Meaning he's loopy.

Politics, yes, politics is always in the air at our meetings. But we’ve come this far — I don’t want to ruin it by lambasting too many folks and prematurely driving a wedge between us in spirit. I have to keep telling myself, "Fish and Crawdads," the mission, the goal first. Then someday, after all this is a huge success, only then can our meat of the goodie be openly telling them off and where to get off -- maybe even ceremonially stripping them and attaching Crawdads to the fleshier bits --  then showing them the door.

We used to get rid of fish baddie by dropping it to the turtles, enormous turtles, like a yardstick across. That's a good way to get rid of things. I saw it happen. And no one ever got caught.
Posted by dbkundalini at 8:02 AM