Taking The Scotsman To Task 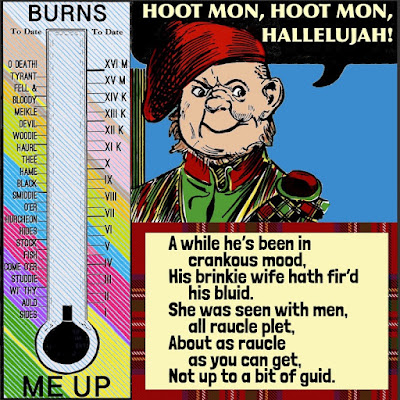 I’m not huge on ethnic slams. I used to be, somewhat, with the put downs and riddles that were popular. I never thought that would change. But change it did, in huge ways. And was suddenly out of favor, to the point of real insistence to not ridicule people’s abilities or lack of abilities based on their nationality, place of origin, and current country of vegetation.

Of course I can see the point of all this care and concern for others. It's now in my blood, always tiptoeing by and keeping my nose out of national and ethic distinctions. Because we're sensitive. And it’s not tolerated, any suggestion that entire nationalities of people, let alone races en masse, could ever be reduced to a few stereotypes which then are hammered at constantly, beating the people down relentlessly, so that while we’re laughing and slapping our knee, they’re on the sidelines going, “Hoot mon, hoot mon, whadda bluddy helle is dese affronts to mine native digin'knee?!” I guess that’s half Scottish and the rest faux English, and as funny as a pent-up insecure smallish white guy can muster.

The Scotsman, now there’s a specimen, right? They love it, their identity. I recently met a guy, kilt and all, very serious and charming. I don't know what he is at home. Maybe half Robert Burns, half the Scottish version of our American hillbilly, making home brew, with forebears and heroes called things like The Bruce, the Dale, Robbie-Boy, and Baby Plaid. The little I know about it, like the Scotsman’s last wadde of moneye, is they hang on to it, like the bald man’s combe, they'd never part with it. I know some of these zany people spent their times so far back in the hilles they’d be loste if they every came out or tried to go back. So, naturally, like what happens to most of us, if you're loste, stay put, and hope someone finds you, if they think you’re loste, or leaves you alone if they know where you are. I can only refer you to a good book on Burns, which is about as easy to read as tea leaves a'brewing, but funne.

The biggest slam against the Scotsman, the focus here, is how tight they are, stingy, hoarding, always wanting to hang on to their last dime, etc. The Lord loves a cheerful giver, but has to settle for whatever pittance he can get from the Scot. Then there’s all the other hilarious people of the world, the Polish, the French, and whoever my own people were, Heinz 57 in one crammed bottle. It’s a nasty subject; I got guys in my family tree that should’ve stayed there. We're standing upright and erect now, guys, and not just on our honeymoon... No knuckle-dragging unless you're polishing your ring.

Smooth transition: Now I need everyone of you, fellow unevolved apes, monkeys, and chimps, to pitch in and put us over the top for the blog. Has our crew been through your town yet with the traveling thermometer display? I'm no Scot, I paid big moneye for it. You’ve no doubt seen it passing by. If you see the display, please sign up. Put your name on the pad and we’ll see that you get updates. Let’s fill the thermometers, OK? Hoot mon, hustle! We’re depending on ye, aye! And in this case, it’s going to be extremely comfortable even for the Scot, because it’s entirely free. You will not be billed. And any penalties there may be for early or late withdrawal, we'll apologize to your wife about that later.
Posted by dbkundalini at 6:41 AM