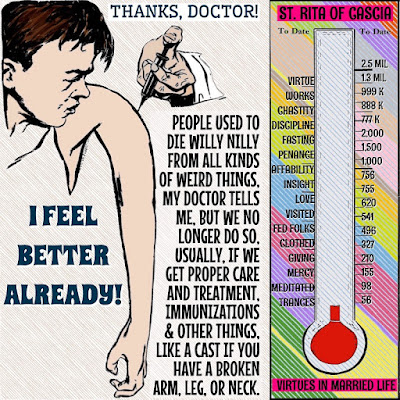 Part of the reason for this important post is to show that I can write about serious issues without getting down and wallowing in the mud with people -- little more than grunting swine -- even though, yes, I am taking them to task. Today it’s about parents and their children, victims, when they don’t get vaccines for them. Bad deal. I'd love to sit you all in the corner for an hour, maybe a year.

Yes, yes, I know this issue is fraught with peril, because supposedly some of these people think they’re doing their kids a big favor. Something to the effect of there being more toxins in vaccines that are harmful to them than the actual diseases. It’s an issue that I have only a few opinions about. And my opinions are all very traditional: Get your vaccines, because diseases are terrible, and you’re better off if you do it the doctor/medicine way. Those "toxins" ... big deal. There's not a perfect world apart, you're part of this particular environment. Sink with the bugs or swim in spite of them.

When I was a kid, we went right down the list, whatever vaccines we needed for school. Whether we liked them or not. And with our shortsightedness as kids, if anyone offered to let us stay out of the vaccine lines, we might have. I’d like to think I’d have more maturity and sense than that. Knowing what I know now, yes, I would. But being a kid who didn’t like needles, I might not have had that sense. Of course I had no choice. Meaning I also went to school.

Now I understand that there are parents whose opinion is that vaccines pose a greater risk to Junior and Missy than not having it at all. It’s very hard for me to discuss this issue without cussing those folks out, except I swore a vow several years ago not to allow anything blue on my blog. And even though I haven’t adhered to that vow 100% — because I sometimes think, seriously, that vulgarity is the only way to say what’s on your mind -- I'm trying to use kind words rather than the serious blue cussing that is more natural to the subject. This is a subject where a vulgar lapse is a real possibility if I would only allow it.

But would parents change their mind if I cussed them up one side and down the other? Maybe. The shock of the obscene is useful. But also perhaps not. Because, frankly, if they’re that far gone, I don’t suppose they're going to listen to reason either. So I’m left just frantically expressing my opinion based on my other opinions and doomed to please no one, them or others. Because you’re just itching for a good cussing out, for the proponents of vaccines to say “Yes,” and the opponents to say “We told you so, these pro-vaccine blogs are full of it!”

So let’s agree to keep it clean. And hopefully I’ll be able to take you down and make you cry UNCLE  by my niceness. OK, there’s bugs, there’s bacteria, these are potentially death in your blood vessels. There's no purity. You have to get down in the dirt with disease or it'll take you out. We had disease like that years ago, with kids in braces and hobbling down the street, struggling to board the bus, etc. I saw these kids and knew some of them and always felt badly for them. The way it was, they were just a bit early to be struck and not in time for the vaccines. Which is too bad and terrible.

I on the other hand was a little later and by then there was a great push for vaccines. And look at me now. Old, able to walk normally, etc., nothing dreadful about my health. I still get the shot for the flu every year. But remember a few years ago, the vaccine wasn’t dead-on, because there’s a certain guesswork that has to be done in advance, and these things can shift in the meantime. We got the flu real bad that year, but we’ve been OK ever since.

Let me end on this sad note: Kids, if your parents won’t let you get vaccinated, please write me with their name and if I find out it is legal I will scrawl you a note that you can use to get one.* Please spell their name exactly as it is. No nicknames, please. And if I can I’ll be getting back to you later with a release that swears you’re telling the truth and will not be using the note or my signature to buy alcoholic beverages or harder drugs. It might take a while for everything to happen, because I have to use a few back channels not necessarily in this country, and foreigners, true to their foreign nature, can be stubborn.

Meanwhile, please do me a favor and help break our thermometer! Like or comment or subscribe to this blog — if you can figure out how. Try hard until it's done. Because I want to see every thermometer completely destroyed! And whatever everyone’s opinions everyone has about vaccines, I’m sure we can all agree on the sentiment that this is the world’s greatest blog and should be treated as such.