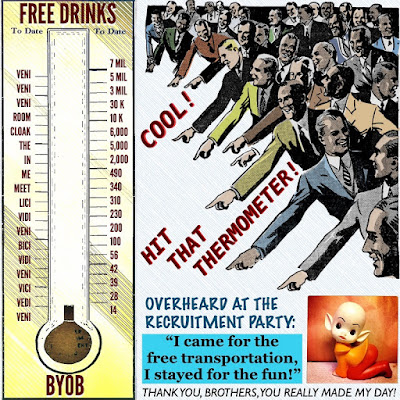 I’ve never stepped out like this, so boldly — but I’ve never had this degree of confidence; I’m overflowing with confidence and actively pursuing men to join me in a great cause. Now here I am, in awe, the big meeting just dismissed. For a successful meeting it was, holding lots of promise for the future of this cause. Inspiring stuff.

Every doubt I might've had is set aside, all because these great guys, these dear souls, these men came together with me and we joined hearts. They promised their all, asking very little in return. But what would they ask? For these are men who've somehow set aside the selfish gene. To the point that, in some weird way, they were more than individuals and yet not a nameless faceless mass. They acted in a single good spirit of cooperation with enthusiasm to match. And I’ve faked enough enthusiasm in my life, I can see it a mile away.

OK, there’s that. But once he got there, the free transportation fulfilling its mission, he stayed for the fun! That’s delightful! Since he's also saying if it hadn’t been fun he wouldn’t have stayed. What would he have done? Gone back home? Just assuming the transportation back home would also be free? That’s what kills me. He got free transportation TO the meeting, but he wouldn’t necessarily get it home if there was no fun to stay for. Still, in a way he would’ve come out OK if he had to pay for transportation home, because it would’ve only been half of what he would’ve paid if transportation there hadn’t been free. But think about it again, he still would be paying money out of pocket for having been at a meeting he hated. And that’d still make me mad if I were him. But he trusted whoever it was that gave him a ride, so it's natural that he'd want to cool any simmering resentment for the sake of his friendship. I’ve done that before, kept my mouth shut so I wouldn’t lose a friend.

Regardless, it’s a moot point. He got free transportation there, he thoroughly enjoyed himself in the meeting, and no doubt got free transportation home. (I just thought of it, if he hadn’t enjoyed himself, he could’ve waited in the car and gotten free transportation home with his original ride. Then I might’ve lost the loyalty of the driver, because he might’ve been worried about his disappointed friend outside. Then he would’ve left. And this other guy over here might’ve been that guy’s best friend, who would say, “Sam doesn’t like this meeting, maybe I should leave too.” And so forth, till it was me and one last guy who needed a free ride home.

It definitely does pay to offer free transportation. That’s the lesson. Because I'm miles ahead if more people like my blog. And if we blow these thermometers sky high, that we might gladly see the mercury spew forth from the tops as the pressure builds and rises and there’s no other place for it to go, until kablewy!.....it shatters the glass and attains the heights of ultimate glory!
Posted by dbkundalini at 6:31 AM