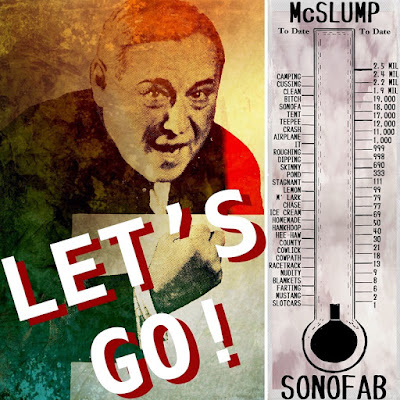 What a thrilling thing it is in when the planning stages are past, the organizing principle is embraced and celebrated, having given shape to your grand purpose, and you’re down to one last decisive pronouncement. I think of it like the jostling of horses, getting them into the starting gate. The handlers put up with all their crazy rambunctious ways, even though it's superfluous to the mission, running 'round the track without stubbing their toe. For they see in their mind's eye the final glory when their horse comes in first, and they at last have nailed the beauty queen, the ultimate reward.

Oh yes, there’s so much that goes into the planning of things. And it’s true what the psychologists say, "You can plan to fail." Or maybe that’s guidance counselors. Yes, I’m thinking of one particular guidance counselor, forever a burr under my saddle. I've had a graphic on hand to use against him for years now -- a killer graphic -- and I'll run it if I ever feel brave enough to take him on, lo, these many decades after his nasty business. But whereas he didn’t literally say, “You are planning to fail,” he insinuated everything short of it and everything past it. My key hit on that SOB, which gets to the heart of the graphic, is, “You first applied to be wrestling coach but settled for guidance counselor.” And you expect me to know what I want to do right off the bat?

I never plan to fail. But that doesn’t mean I always plan to succeed either. Let’s keep my idiot guidance counselor in mind a bit longer. Look at Thomas Edison or Henry Ford. Neither the guidance counselor nor I know what all those men went through to succeed on this or that invention. But it’s obvious that they didn't know everything about the end from the beginning. All along the way there had to be multiple dead ends and shaky results. Things went well, things went poorly. They trumpeted their successes, yes, and kept their failures to themselves.

But they were wise. They could’ve come up with endless bad inventions, just like any one of us could. Say we wanted to invent a device that killed horses on sight. You could do it. If you lived in their time, it would’ve been a mechanical thing, perhaps at the end of a chute leading to the arena. The horse has done it a hundred times, gone that way. But Edison changes it up and has a bow and arrow arrangement that kills the horse. That would’ve been a bad invention; no one would want that.

And yet, as wise as they were, how many people have been killed because of Henry Ford’s invention? I have no doubt that every time a family wrecks and gets killed on the interstate, Henry Ford’s spirit has a twinge. He can take some consolation in the fact that people have to die of something, so it may as well be a car wreck. A personal memory of mine, speaking of Henry Ford's evil, is I was almost killed on the interstate on my way to tour a mausoleum... How’s that for irony? And if Thomas Edison inventing the phonograph was such a great thing, how does he explain Milli Vanilli?

This whole thermometer series illustrates the problem from my point of view. There could potentially be millions of people blowing the tops of thermometers off from liking my blog, reading it, telling others about it, subscribing, etc. Which could have bad consequences, the shattering glass. Maybe they'll be reading it while driving and lose an eye, so I'll have to split the blame with Ford. Think of the pressure I could be under. I'm very private. As it is now, I have no worries, saying whatever I want, blathering away, knowing there’s no risk, there's barely anyone to be disappointed. I never have the danger of people unliking it. I'm never chewed out for the slightest thing. I do, however, always expect it. Take that paragraph about horses being automatically killed. I’m afraid people will unlike me for that, but there’s barely anyone here anyway, so what’s the difference?

Hmm. I want to say, “Let’s go!” Let’s get this blog party started! Do whatever you can, be the blog, let the blog be you, turn off your mind, relax and float on the blog, tell your friends. And when I come up with a Men’s Club for the blog, please join it. And ladies, when we come up with a Ladies Aid division, please volunteer to join it. Find a guy to sponsor you and you'll love it. Opposite sex partners, same sex partners, and single sex partner (do it yourself), and even non-sex anti-partners will be welcome. Just tell me in graphic detail how you swing and what your life expectancy is and you'll be accommodated.

Then someday — when I get entirely sick of the whole thing — I will take it to a tall bridge and cast it over the side, letting the turtles below deal with it as they may. That day, however, is not today. Today is time for us to go! Join with me! Let’s go, go, go!
Posted by dbkundalini at 6:46 AM