The Valor In Excelsis Club 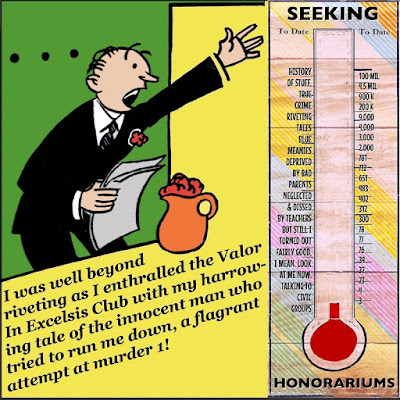 This week has found me offline quite a bit, as I was pressed with a public speaking tour throughout the Big City on behalf of the blog. Our drive for new readers has taken on a life of its own, with a bunch of folks receiving me graciously, asking me to address their organizations, and even presenting me flowers.

And of course I never play favorites, never have, never will. But the red roses from the Valor in Excelsis Club — a solid dozen of the prettiest red roses — touched my heart most of all. Which is not to say the others were bad, not by any means, but the pretty red roses were miles away my favorite and no doubt the ones I will remember the longest and with the most fondness. They're in a quart of water by my bed.

The Valor in Excelsis Club also gave me the biggest reception, shaking hands with me, seriously shaking and introducing me around, and in such a way that I truly knew I was among friends. I don’t know exactly what it is about the Valor in Excelsis Club that makes them unique in the club-speaking business, but they truly go all out to make a guy know he’s the center of their meeting. I haven’t got a big head by any means, but the way the Valor in Excelsis folks made me feel so special, it started to make me think, I must be better than I knew!

Anyway, it was a heart-touching time. Please join me in a big hand for the Valor in Excelsis Club for their superior reception and closeness of attention to detail — far surpassing all other clubs in that regard as well. I can say without the fear of contradiction, when they formed the Valor in Excelsis Club they broke the mold, because these guy are the absolute peak, the best of any club I’ve ever had an acquaintance with. And, yes, I’ve seen plenty of clubs -- from the Bee Club to the Spy Club we had as kids till today.

My sales job to them on getting people to read my blog was heartfelt. I’ve got a certain technique — OK, I’m going to give you the inside track on my speech technique — I picture myself climbing a mountain with the rhetoric. Then when I’m at the absolute peak, where it seems like I will soar into the stratosphere, I break down as though I can’t go on. The analogy here is a roller coaster that stops at the peak of its highest drop; it takes your breath away. People are popping oxygen pills. Then right at that moment I segued into a riff about the Valor in Excelsis Club, how well known they are for rescuing people. Then in hushed tones, I fought back tears. The place was incredibly still as I regained enough composure to thank them for “how you rescued me...” Significant trail-off, touching heart, we were all sobbing. Fifty dollar check.

I’ve used the same story with other clubs, and of course it’s always someone from their club (a different chapter out of town) that rescued me. But all the Valor in Excelsis Club does is rescue people so what can you say... They see someone in danger, they'll trample each other to death to be the guy who gets the credit. So that’s the way I told it:

“I was with my mother at the Ridiculous Day sales one year when a madman came careening down the alley, right toward me. With the weirdest part being he was found innocent that very day of an unrelated crime. I was frozen in my tracks. I didn’t know what to do. At 12 years old I was mentally a babe in arms, literally a basket case.

"But I knew the guy was crazed, and the shame of being accused of an unrelated crime was too much for him. He would go out every bit the criminal they said he was. Tragic. Anyway, here he comes, with enough hate to burn the village to the ground! But his hatred was for me alone, a random kid he'd never met. I personally saw him scouring the rest of the town for other victims. There was no stopping him, nothing anyone could do.

"When some quick thinking members of the Valor in Excelsis Club, the most alert people on earth, saw the hazard and swung into action. Each Valorian had a large hook and rope and flung them toward every fire escape in town, God is my witness. Then just as that hazardous motorist could run me over — and we later learned he had the worst of intentions, having put a cement brick on the gas to make his evil deeds even more irreversible — the Valor in Excelsis Club rescued me. Unfortunately they couldn’t rescue everyone, but I was spared, saints be praised.”

The other downer is that several Valor in Excelsis Club members themselves were impaled on the hooks and killed. And every year I recite their names and toll a memorial bell purchased for that purpose. That day and New Year's Eve.

I concluded with a personal request: "Thank you very much for this lovely plaque. I’d like to request as well, if you ever have any honorariums up for grabs, I’d be honored to get my mitts on as many of those as is humanly possible.”
Posted by dbkundalini at 6:45 AM