A Day Of Fancy Sword Work 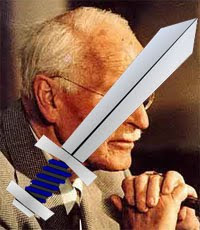 Dark, dense brooding ... then a field of light ... and back into the thicket. A sacred sword pointed is powerful, humbling the horses.

A day of adjusting, conjuring, bringing all energies to a head. My motivations being pure, I shall prevail. Tonight the zipper comes down!

I will boldly proclaim the work in which I am engaged. The key to everything is right here ... But first I have some normal errands to run.

We're out of shampoo, need cat litter, athlete's foot spray, baby aspirin, and a few other normal things. Off for my day. Goodbye.

There's never been five more powerful, more meaningful tweets written. Earlier today it was an unconscious power fest that brought forth these words. After what I've been through this week, being shot at and being confronted by grange assassins, my consciousness had burrowed itself in a hole, concerned with having a nice day. My conscious mind said Live and let live. But deeper forces have been at work, which I didn't even realize until those five tweets presented themselves. It was expressed in such a way that, rereading them later, I was floored. I had my marching orders!

So, there's never been three more powerful, more meaningful tweets written than the first three. The fourth is great because of the resolve to declare my work. And the fifth is great because it shows I have not (and must not) lose the connection, no matter how strange my work sounds, to the day to day affairs of life.

So the fourth and the fifth are still very powerful, very meaningful, joining again their rightful place with the first three as the five most powerful, most meaningful tweets ever written.

I did quite a bit of sword work today. Twirling, pointing, stabbing at things. Some of it will be related below.

There is a grange dance tonight. It should be certain death for me just to show up. But I have the confidence that I shall prevail.

My confidence is the result of an extensive process of psychological stewing that accompanied today's fancy sword work. I started with the dark, dense brooding mentioned above. What was around the half acre that was decaying, I studied with close attention. I ceremonially cut some dying weeds and in the mind's eye saw them become black. Things will submit to me, then I will tend to them in their submission.

I passed one of my cutlasses over the objects of my attention and found myself with a bucket of water to rinse them clear. This very bad week was redeemed, the power the assassins held over me had been exposed to the light of day. What problems I had with the Grange society going from the Brotherhood to the Sisterhood, I resolved. No matter what gender they are, they're going down!

As I continued this important work, I saw a dawning of light before me, giving me the full assurances that the true morality is about to be revealed. The disparate parts of my consciousness are reuniting. My full purpose is becoming manifest. My true nature is being revealed, the one who brings rejoicing for all!

Farmers' daughters: Put on your skimpy pants! I'm on my way!
Posted by dbkundalini at 3:36 PM