Put This In Your Pipe: "Rep. Joe Wilson" 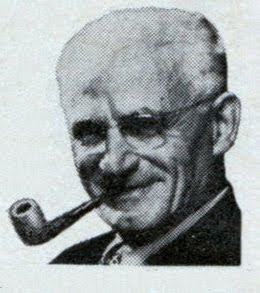 Yesterday this blog took the bold step of insisting on the forgiveness of a Republican, Rep. Joe Wilson.

Some of our mail has not been kind. There have been a few articles written, taking us to task for breaching "progressive orthodoxy," whatever that is and whoever it is who decides it.

From those on the left, we have heard, questioning our progressive bonafides. And from those on the right, we have heard, questioning our sincerity, and insinuating that even if we were sincere, this Joe Wilson issue is a scandal best dealt with "in house," i.e., among his own brethren, and that they frankly resent any meddling from a progressive site.

Point taken. We remember how there have been serious infractions on our side as well -- John Kerry's "botched joke" being an enormous scandal -- and indeed those of the right sat silently on the sidelines, refusing to supplement an already inflamed situation with gasoline that one could add. It was for us to work it out on our own, having received their blessing for a successful resolution. All they were concerned for was how long it would take us to get back to the virtues of responsible civil dialogue, which subsequently we did after consultations with Sen. Kerry, his apologies, and a grateful nation's forgiveness.

The Bush administration -- of which we were not proponents on several points -- at least always had an abiding concern for civil dialogue. As we fondly recall, they insisted on it to the point of "bending over backwards" if it meant each side might get along better. It was something we all could appreciate. But now, without those guiding principles as much in evidence, it is of course more in the nature of things that there will be legitimate suspicions and lingering doubts about our sincerity.

To our critics -- left and right -- let us ask for your patience to explain. To the left, let us say, we believe "progressive orthodoxy" is a work in progress; no one group has a monopoly on our common cause. Searching, stretching, and testing the limits of discourse has to be part of our enterprise. We believe just as you do, but it just so happens that we also believe in forgiveness and second chances, whether for those of our own philosophy or those of the loyal opposition.

And to the right, let us say, you are naturally suspicious. If you could trust your fellow man, that is, if you thought your fellow man could do anything right, could make progress at anything, you'd probably be progressives, as the very word suggests. But since you're conservatives, right-wingers, you doubt, and the things you say to your fellow Americans are often taken as demeaning. Yet, insofar as our objections can get a fair reception in your mind, let us say that we indeed were sincere. We believe that Rep. Joe Wilson, as bad as what he did was, deserves a second chance. To us, that's what America is all about.

Our site will continue to reach across the aisle. We will continue to look for middle ground, not the middle finger. We will not give up, but we will strive with resolutions for what brings out the best in all of us. We will look for what is common to Americans, period. Backbiting has no place in our vision of America. But making a "more perfect union" out of us all ... is all.

That's what we have to say about Rep. Joe Wilson, who we fervently believe needs to be forgiven and granted once again the trust that is typically given to Congressmen. Yes, perhaps we should train the "Wilson Cam" on him for a few years. There's no harm in that. If it catches him again doing evil, then we will likely advise counsel for him and again seek to bring him back into the fold. But say it catches him doing good! Then we will have something to celebrate together, that one who was lost has been found. That one who had wandered has been restored.

Let each one of us always hope for the best in all things, and in each other.
Posted by dbkundalini at 4:34 AM