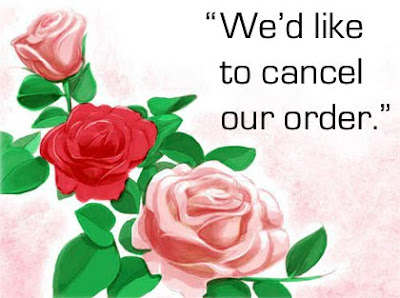 I had this wild idea last night but I'm not going to do anything with it except just say it. It's that there's one guy who somehow becomes involved in destroying the Rose Parade.

The way this would happen is like the old story of how they make a suspension bridge, by taking a single string across the river, then pulling over a smaller piece of metal cable, then a bigger one, etc., until you have huge spans.

It starts off with a little thing. But then through the vast network of contractors and planners it takes to coordinate and do the Rose Parade, there's all these ripple effects. In the idea it starts with an email that comes in error to the guy involved. He's asked to sign off on some little detail of the Rose Parade, like contracting with a greenhouse somewhere for roses for one float.

Somehow he gets the idea that he holds the entire Rose Parade in his hands. And that with a few calls -- changing his voice and sounding official -- and a few emails, everything could be in place (or out of place) well enough that there are all these ripple effects.

When he screws up the order for flowers for that one float, it makes that crew and a crew at a different float start to panic. Then various crews are up in arms. Contractors are wondering what went wrong. Tempers flare, feelings are hurt, there's delays in shipments, etc.

Now, getting back to the original guy, he's not passive in all this. Because he has various numbers and email addresses that were in the body and headers of the first email. So he's calling around, ordering five times as many roses, let's say, and demanding their delivery in an unreasonable amount of time. But he's also postponing delivery from very trusted contractors for the Parade, maybe insinuating that they've been cheating the Parade all these years. With everything he says and does, he's completely enraging the contractors.

You can see where this all ends up. The float crews are in a total panic. They're busy contacting contractors on their own. Contracts are being breached, because they're also making independent calls to outside contractors, trying desperately to get their quota of roses. Now there's a complete meltdown in the industry. They've either stepped up rose production or slowed it down. Money is being lost either way.

Since there's all this brouhaha about the flowers, the builders of floats are delayed -- why build if you can't get the flowers? Of course that's against the builders' contracts, they think. So they protest. But there's some fine print they've overlooked, meaning they lose face when it's pointed out to them. Builders, though, are a proud bunch. So they walk off the job in spite of the fine print.

Now the Parade organizers have no choice but to bring in alternate builders, because they also don't want to lose face. The alternate builders throw up their hands when it soon becomes obvious the first builders burned all the blueprints and sabotaged the computers.

Around December 1, the first week of December, there's complete chaos in Pasadena. They know they can't make it. Roses have wilted, other flower workers have been laid off. The finances are ruined and people haven't been paid. It's a terrible, hideous mess.

January 1 rolls around and the Rose Parade struggles to put on a show. Farmers from the area bring in their tractors and hay wagons. They hastily find some guy from the parade line to be the Grand Marshall. They pick his wife to be the Parade Queen. And that's the parade.

Meanwhile, back home, wherever that guy lives, there's at least one person who's really enjoying the show!
Posted by dbkundalini at 7:32 AM