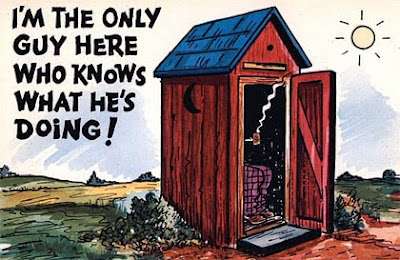 I hate public restrooms. In fact, the only time I'll use one is when I need to. Otherwise, I won't.

You never know what you're going to find in there. It's usually a filthy mess and I'd rather not touch anything. If I could float in, that'd be ideal. But if I could float, I'd just float up in a tall tree somewhere, go to the bathroom in midair and let it float away... The ideal world ...

But since I can't float, I walk in. The first thing I notice is if the door is one you push or pull. Because somehow I'm going to have to get out of there without touching it with my hand. If there's paper towels, it's more manageable. But if there's just a blower, it's a lot trickier.

Then I check for privacy. There's nothing more detestable than to have someone else in the bathroom with you. It inhibits me so much I may as well float right back out because nothing is going to happen. It's inconceivable to me that people have sex together in public bathrooms. I'm about to puke right now just thinking of it. I hate touching even the faucet, so believe me, I'm not touching anyone else.

If there's anyone in the world queasier about public restrooms than I, I would definitely like to meet that person. Because I frankly don't think it's possible. You would definitely need to pass a lie detector test before I'd believe you. And I would need to look deeply into your eyes -- deeply -- because I know you have to be lying.

These days, now, we have all these crazy people running around the country worrying about "socialism." They're nitwits, pure and simple, of course, in their politics, as stupid as can be. But I will agree with them, there's one "public option" that isn't that great. The public toilet. It's socialism!

We need "pot packs," like a backpack that folds out into a toilet. With some of those camping chemicals, that you pour in and it vaporizes everything it touches. Or some kind of crap-eating grass carp swimming in there. But since grass carp grow about five foot long, that's impractical. How about the crappie? It's a fish with a name for it. And "carp" is pretty close. More ideal world talk.

Getting back to the socialism issue. Unless we really, really need to go, we don't want the government furnishing public restrooms to every person who comes along. You never know, maybe an illegal immigrant will decide to go in and ... do his thing. That's our taxpayer dollars subsidizing illegal immigrants! If they're here illegally, let them hold it until they get back to their own country!

I heard a guy saying he read the Constitution and he couldn't find anything in it about the government being involved in health care. That's a great point! So I got out my Constitution, too, and I read the whole thing, including most of the amendments. And you'll be amazed at what I found ... or didn't find. There's not one word in the U.S. Constitution about public restrooms! Clearly, they're unconstitutional!

(There's one other thing about what the Constitution doesn't say, and being an honest person, I need to mention it. You've probably heard me tell about my two uncles I'm so proud of who served in the Air Force. Well, I might have to rethink that. Because I didn't see anything in the Constitution about the Air Force either. So, I hate to say this, but I think my two uncles may have been doing things against the law.)

From now on, friends, if you're a patriot ... if you love your country ... please join me in boycotting public restrooms. Public restrooms are just the government's way of softening us up, taking away our Americanism, and leading us toward socialism! What's next? They'll get us using public restrooms. Before long, even the roads will be public... Let's hope that day never comes.

So, if you want to use a public restroom, go to Russia, where you belong!
Posted by dbkundalini at 4:57 AM