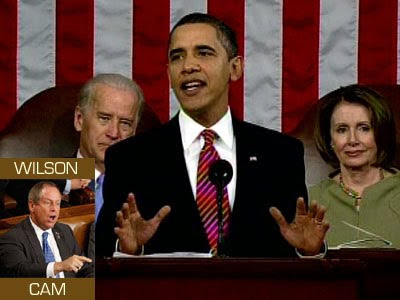 Rep. Joe Wilson, Republican from South Carolina, now so very well-known for his outrageous interruptions of President Obama, doesn't think he did anything wrong. So the Congress is debating whether to censure him for his most recent outburst.

His explosive, abusive character has come under fire in recent weeks especially. The taint of scandal has been never far from him, along with the smell of corruption. But he hangs on somehow and insists he did nothing worthy of punishment.

We are thinking that anything less than censure will not measurably slow him down. As he has been persistent in his avowals of innocence, it is our fear that he will continue to bare his teeth and lash out whenever the president makes appearances in Congress.

There's been talk of having a Wilson Cam on him the whole time, so that we can keep better track of his bluster. I think that's a good idea, as it would be helpful for security reasons in solving any unexplainable attacks, perhaps as they involve more than simply words.

At one time I felt the Congress and its members had the veneer of respectability. But in recent months, since President Obama's inauguration, with all the virulence of the right, that veneer has lost much of its shine. I would urge greater security whenever the Congress comes into contact with the president, so that he is protected in every way.

Rep. Joe Wilson has shown his true colors, which have not been those of a true American. He has demonstrated that wherever he goes, we need to keep our eyes open, our sensors on. If he's going to be present in Congress, the Wilson Cam is the way to go, at least at the start. Then if he continues to act up, we respond to it as it seems appropriate at the time.

But America is the land of second chances. Rep. Wilson has used up, in some sense, all of his chances. But America is also the land where we believe in mercy and bending over backwards to restore the wayward. It is our hope that Rep. Wilson will be willing to meet us halfway.

What Rep. Joe Wilson has done in recent months is vile and despicable. There is no argument about that. I have heard none. Perhaps he does deserve being evicted and removed forthwith. But I still believe in what I said, what's in the essence of those values and traditions. I refuse to think that anyone is all bad, even this guy. I firmly believe there must be some good in him.

So, yes, go for the censure resolution. Yes, go for the Wilson Cam, for our protection and his. But finally go for forgiveness and restoration, first, last, and always. Show him we're bigger than he is, and that he will receive another chance, a chance to make things right in the future.

His heart may be hard now. But won't it have to soften up with America's hand of mercy?
Posted by dbkundalini at 1:23 PM