Battling "Twas The Night Before Christmas" 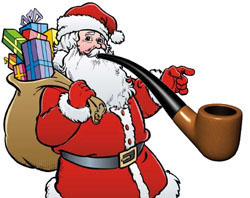 I've been involved in a pitched battle against the poem "Twas The Night Before Christmas." My goal is to see it removed from circulation, or barring that, to get it out of the reach of children.

Maybe you saw the article in the Daily News yesterday, "Local Man Objects To Beloved Poem." The way they slanted the story, it sounds like I'm some kind of crank. And I'm thinking the lack of public support I'm getting so far is mostly owed to that. It's only been a couple days and so far it's been a lonely battle.

Of course I think my objections to this "beloved poem" are entirely just. And anyway, isn't this supposed to be a land where we respect one another's right to "air grievances"? If I could just get a fair hearing without people prejudging who's right and who's wrong, then I'm sure I'd come out with the long end of the stick.

My basic objection to this "beloved poem" is the line that, I believe, glorifies smoking, presenting some very harmful imagery for our children to be reading or hearing:

Essentially, if they'd agree to excise that one little verse, I'd be happy. I mean, I see objectionable content throughout the poem, but I'm willing to pull back on some of the other things. It's just that I don't think smoking is healthy for children or other living things, like war. How many deaths do they attribute to smoking? I don't know, but I know it's a high number. And how many smokers were influenced to start smoking because of the bad example of a beloved character, Santa Claus, as portrayed in this poem? It has to be a lot!

Anyone looking at the poem can see the line doesn't really fit anyway. The line right before this one says, "And the beard of his chin was as white as the snow." How would you reconcile that with a guy having a stump of a pipe held tight in his teeth, with smoke encircling his head like a wreath?" Assuming this wasn't the first time he'd smoked, which would be ridiculous, his beard wouldn't be white as snow, but instead would be brown not only from the smoke but from spit from his mouth darkened by tobacco use. And with smoke encircling your head like a wreath, naturally that means discoloration of the beard, the teeth, and even the walls around you.

So if you take the objectionable line out, it would go from the part about the white beard to the part about his broad face and round belly. No one would even miss it! And yet there it sets, year after year, and even century after century. By the way, to note his round belly might contribute to obesity among our youth, but I'm willing to overlook that. I'm not even going to get into the other things I object to, since it would take away my focus. But start thinking about some of this language: "The moon on the breast of the new-fallen snow..." It really could've been more family-friendly. I mean, I'm not Dobson, but some things are truly objectionable.

Really, I shouldn't be alone in this. I've heard how others have taken up the anti-smoking banner, and have even been successful in getting certain things shelved, like old cartoons where various characters are smoking. And I haven't heard anyone calling them cranks. It all depends on what you're against, what you feel like shelving. I even heard that Bob Barker somehow had the veto on old episodes of "The Price Is Right" where they gave away fur coats. They can't show those episodes now thanks to that! Because suddenly fur is on everyone's $#!+ list. Well, Bob Barker would surely object to this line from our "beloved poem":

He was dressed all in fur, from his head to his foot,
And his clothes were all tarnished with ashes and soot;

Personally, I don't care about the issue of fur. Animals that are already dead don't need it anyway. And if we eat their meat, what's wrong with using their fur? You could argue that their meat is more essential to their survival than their fur, although I know both things are essential. But if you're missing your meat, you definitely don't need your fur. Plus, if even Santa Claus himself wears fur, there can't be anything too bad about it.

So please, give me a break. I'm only pitching in to do my part on something that most people would probably agree to anyway, if it weren't such a "beloved poem," a thing of tradition in question. That said, I don't deserve to be called a crank. And I don't deserve anyone's personal scorn. In fact, the lives I save may be those very people's children. Think about it, if I can keep one little child safe -- just one little child -- then it will be well worth the price of everyone's scorn.

The poem, I'll admit, is a great one. But it doesn't need this one objectionable stanza to be great. It would be better without it, in my opinion.

If you agree with me, and I'm hoping that there will be groundswell of support, of course, please start a petition in your area, and present it to the proper authorities, libraries, teachers, the Christmas Club at your bank, Santa's helpers at the mall, and others of your choosing.
Posted by dbkundalini at 4:34 AM