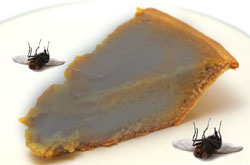 I've still got some of the Christmas tunes in mind. I'm trying to shake them, but it's hard.

One of the songs, which I love, that I can't get rid of is "Sleigh Ride." Even now I'm singing it in my head. "It'll nearly be like a picture print by Currier and Ives. These wonderful things are the things we remember all through our lives." It really is one of the more charming songs.

But one of the things I think of when I hear old songs is what became of the food mentioned. Because food doesn't keep. So in this song, they're passing around the coffee and the pumpkin pie, which in my way of thinking, since the song was written decades ago, has to be very old and moldy by now. The writer was looking at a fresh pie, but all I can picture is a moldy pie, or maybe a pie that's petrified and used as a doorstop in a barn.

My mother, out there somewhere, has an old apple that belonged to her great grandmother. It's in a case in her house. It's shriveled down and solidified itself. It's an apple mummy. If my great great grandmother had written a song about her apple, that's all she'd have left.

There's all kinds of old stuff that exists that shouldn't. This apple. Or leaves and flowers in books. And I've even had clumps of people's hair from 100 years ago that I've found in books. This stuff isn't moldy, thanks to being out of the air. It dried out so much, like the apple, that now it's impervious.

But the typical cup of coffee and pumpkin pie are going to be in bad shape by now, stale if nothing else. Because no one thinks to dehydrate them before long term storage. And to find a slice of pumpkin pie or cup of coffee pressed in a book is very rare.

One of the other Christmas songs, one I only heard six or seven times this year, is "Rockin' Around The Christmas Tree." It also has pumpkin pie in it: "Later we'll have some pumpkin pie and we'll do some caroling." It's the same problem. It may have been great when it was written, but that's some pie that's gone bad by now.
Posted by dbkundalini at 4:30 AM