Vibratory Essence: The One Who Died 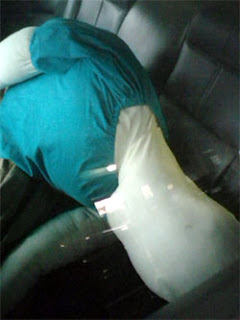 I had troubles with this one. There's all kinds of troubles -- ethical issues that are beyond even my ability to full describe.

But I collected her vibratory essence (or energy) and brought it home and had it on my shelf. What was I going to do with it, except honor her by putting it to good use? I didn't want her to have lived and died in vain; that'd be a royal bummer. So with devotion to Swami Masturbananda, I would honor her...

It's a sad story. Because the fact of the matter is, that somehow unknown to me, the whole process of collecting her essence went horribly wrong. I had seen her sitting in the car in a blue shirt. I thought she was cute. So I sat the jar there next to the car -- then when I went back innocently to retrieve it, I was confronted with the horrifying sight seen in the photo. She was sapped of everything, and all that was left was a mass of indistinct white mush, human shaped, and of course a very nice blue shirt.

I didn't touch a thing at the scene. I just snapped the photo and got my jar and got the heck out of there. Of course she was later found, but so far the paper says there's no leads. I'm just trusting my readers not to mention any of this, and let me express my thanks for that in advance.

The police were reportedly "baffled" right away and threw up their hands. They have no idea what the white mush is, or they're not saying. It's all very baffling. The brought in a psychic. Apparently she discerned an unidentifiable "hot spot" where my jar had been, but beyond that even she's baffled and drawing a blank.

That's where everything stands now. And as long as all of us keep our mouths shut, there's won't be any trouble. And just to make sure none of you talk, remember, I know where you live and I have access to lots of mason jars.

But the bigger issue, what was really bugging me, was what to do with her vibratory essence. I gladly used the essence of the showgirl, essentially gotten in the same way. But she was alive when I last saw her. Since this other woman somehow died, it didn't seem like the same thing. But it wouldn't be a case of necrophilia, technically, because her essence was still very much alive. It's not like I'd be misusing a dead body or whatever the white mush is.

Anyway, whose fault was this? OK, I guess it's mine. Still, did she have to sit there forever? Wouldn't she have noticed she was turning to mush and call 911? Or maybe the essence was just sucked out so fast that she didn't have time. It's a terrible thought, that somehow I'm to blame.

So I've seen her jar on the shelf for the last few days. And I was thinking I needed to get her out of the way -- with the added sadness -- before I could go on and actually enjoy the others. I made my best effort. It seemed like her jar was more fully alive than any of the others. I reasoned, what could be the harm? I'm a lover, not a killer. This wasn't even a killing. I was as surprised as anyone.

Earlier tonight, then, I made a meal and had her jar set there. I showered as before. Then it was time for my devotions. The jar was there at the bed. And of course I was there, albeit in a ongoing depressed way, both mentally ... and physically. Detumescence was the order of the evening, impossible to fight.

It was no use. I needed to do the right thing. So I took her jar outside and unscrewed it, releasing whatever essence there was to the night air. I saw a small white ball of light, a little bigger than a golf ball float out. It floated around me for a few seconds, as if to say, "I forgive you." Then it was tentative in its movements, but it finally floated toward the road. I threw up my hands and cried out, but it was too late. A truck came racing around the corner and accidentally ran over her.
Posted by dbkundalini at 7:47 PM