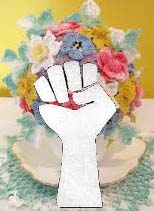 I'm a proud member of a Solidarity Group. You may have heard of them; it's the latest thing, people in communities rallying together to offer support for one another.

We're always looking for people to stand in solidarity with and help: cancer victims, the grieving, injured veterans, people who've lost limbs, Republican halfwits, etc. The thing we're ultimately doing, whether physically or long-distance (emotionally), is crowding around them, offering words of support, commiseration, and even a group hug, if that's "safe" for them. Of course we want improvement in their lives.

Ironically -- and I hate to be a downer about it in public -- we do have some major disagreements among ourselves about who to stand with. There's a real disagreement right now about standing with Republican halfwits. Personally, I feel there's just too many of them, and, even though I'm an optimist by nature, I just don't think it'll do them any good. In fact, it might encourage them in their waywardness and ignorance and not lead them toward recovery or improvement. A lot of people are pessimistic about cancer victims, but at least you do occasionally hear of miracles with them.

But I'm also always one who wants to put disagreements to rest. And I'm willing to meet everyone halfway, even a halfwit. So, yes, if push comes to shove, and the group votes to take that path, I will stand in solidarity with them.

The other night we had an unusually scrappy meeting. Thanks to all the shouting, pushing, and the various leaders walking out, then walking back in ... plus the sound system going on the fritz with some loud feedback, at which point I was covering my ears, I didn't catch everything we voted on. This messed me up badly. The result of which was, I thought we were shaving heads to stand in solidarity with a local girl with cancer. But it turned out we were only supposed to bring cans of vegetables for the food pantry. So it looks like I'll be wearing a stocking hat all winter.
Posted by dbkundalini at 7:27 AM