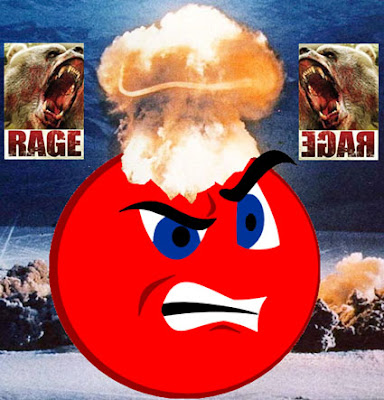 Victory! I found the way to pull this thing out of the fire ... I simply refused to take no for an answer...

That felt good ... And it showed the power of one man sufficiently enraged, with the lesson being, I guess, to tap into the power of your rage at just the right moment. Then when it's unleashed, to let it run rampant, taking no prisoners. Maybe it doesn't sound like a formula for success in the civic arena, where footsie and tabling motions is the usual order of the day. But it could be it's just not used enough; people are too reticent to get really mad, not knowing the secret.

I'm going to have to summarize the whole thing for those of you who've been too ___-lazy the last couple days to read my ___n' blog. The idea came to me that we really ought to do some editing on the beloved poem, "Twas The Night Before Christmas." There's several objectionable things in the poem, as it portrays Santa Claus in a way that's unhealthy and undesirable for our children. You could make a case that it encourages obesity, wearing fur, and smoking, just to name a few. I only raised an objection to the latter, merely seeking to remove the verse

Then, of course, I was met with protests, a quickly put together sideshow of the stupid American mob full of their usual insults and death threats, driven by the local media putting a false slant on the issue, making it an issue of "Crank vs. Beloved Poem," and even questioning my paternity. The positive difference my cause would make for children was neglected. Well, it came to a head last night in a big meeting of the community. An issue this big doesn't come along everyday, so everyone in town was there.

I was fearful on arriving and seeing the crowds, but then I was immediately encouraged when some of the people wanted my autograph. Seriously. I suddenly realized the value in being a major villain: Everyone secretly loves you! Jesse James, Al Capone, Adolph Hitler, the Khmer Rouge, the Soviet dictators, etc. Can it be just a coincidence that these guys are on the History channel all the time? And just the other day I saw a set of six shot glasses for sale with pictures of the Soviet dictators on them, seriously! I suddenly had the key...

Damn, this is something to work with! This is why the Republicans won the election! People love the bad guy! They just want to see someone blow everything up! They don't really care that I might be trying to save their children, that doesn't matter to them; they just want the bad guy to come in and make a mess.

Right there on the curb, I took some pantywaist's bullhorn from his hand and addressed the mob, telling them to shut the ___ up, that this stinking poem was going down. I shouted they could accept it peacefully or they could go to ___, it made no never mind to me. I next threw the bullhorn to the ground and stomped on it, prompting 10 more people to ask for my autograph.

The meeting was at the library, and it was packed out. And suddenly I had the key to life: Walk in there like you know what you're doing, stand there with your face set like flint, and periodically finger the panel and no one's going to give you any ___. It's all Jesus. It's all Jungian archetypes on display. No one can question mythology. Satan in Milton, cf. Stanley Fish, Surprised By Sin. It all proclaims the power of the villain!

There were several church/librarian ladies on the panel, and of course one of the town's milquetoast leaders as moderator. This poor schmuck is one of the town leaders just because everyone else is too lazy to do it and he likes the attention. My blood boils when I think of him. I've been in meetings he's lead before. He's so hopelessly officious, everything has to be cut and dry from a prior meeting in the backroom. But he shuffles papers and occasionally acts confused to give the illusion that the meeting's conclusions aren't foreordained.

Well, he wasn't expecting this: The place cleared out when I strode to the front and picked up his desk and held it over my head. I stood there and calmly outlined my position about the line in the poem being objectionable because of the bad example (smoking) it sets for our children and future generations. I talked for 15 minutes, the desk fully aloft. I explained that we could do this the easy way or the hard way, and that, frankly, it felt like I was in the mood for a little of both.

The crowd by now was putty in my hands. They knew a 200-pound desk being held high that whole time was an implied threat to the whole system, and that I was likely to do anything to get my way. I was negotiating from a position of strength. In a very calm way, I asked the crowd to push up against the wall, because I didn't want anyone to get hurt. Then in the big open space, I brought that SOBin' desk down, shattering it in a million pieces. I stomped through the debris, pointing my finger in their faces and screamed out a rant that is still echoing in the walls.

I went to the press corps and dressed them down. Then I turned my attention to those who'd really opposed me, the grade school teachers and librarians. I had these old marms and the few pantywaist "men" in that line of work in tears. They blubbered out an admission that they were guilty of shortsightedness. Finally, I pulled the moderator from his chair, getting him in a full nelson with my knee up against his back. I screamed, "Tell them! Tell them!" And he also blubbered out an admission, that he'd never run an honest meeting in his life.

That cinched my case. But I wasn't finished yet. I called for a mob to come together. And we all took the offenders from the room out into the parking lot, the teachers, librarians, the moderator, and the local press. I had a kid get the tar and feathers that I keep in my car. We stripped them all naked, tarred and feathered them, and literally ran them out of town on a rail. They were barely out of town when they were all struck and killed by a train.

Now no one dared oppose me. I led the mob to the east side of town, where we stood outside a notorious whorehouse. The mayor was roused from bed. With his pants and underwear still around his ankles, he signed an official proclamation, by fiat removing the offending verse from "Twas The Night Before Christmas." It's finally done! The children are saved from a life of smoking! And now Santa will live forever!

So, to the rest of you out there, beware when you recite this poem. Because I will be watching and I will be listening. And I will track you down. You don't want to see what I can do when I get really good and mad.
Posted by dbkundalini at 6:59 AM