Her Essence: You're Lookin' Hot Tonight 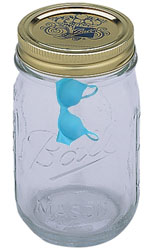 I've got a hot date tonight. So I've only got enough time to jot down some of the essentials of what's going on. I don't want her to get cold feet.

You're looking at a jar of the vibratory essence of one of the eight showgirls from yesterday. I got the idea from riffing on a teaching of my beloved guru Swami Masturbananda. He of course intensifies his devotions by practicing them where young maidens have recently been, knowing their vibratory essence (or energy) still lingers. My idea builds on that, storing the essence in jars, then using it in the privacy of your own home. Our goal is to glimpse the divine consciousness in these times of great sensory excitement...

I've been thinking about it all day, letting the intensity build. I've got a pantry of about 24 lovers, and I'm sure each one of them is eager to be chosen. But I didn't drag out their suspense; I quickly chose one right from the front. To all appearances, there's nothing in the jar. But I thought I felt at least a little electrical tingling and motion when I took it off the shelf.

I want this to be good for her as well as me. So you can see, I went to the trouble of getting a tiny bra to hang on the jar. Just in case she likes gifts. I'm just hoping it'll fit, since I can't actually see her well enough to judge sizes. Anyway, it might be more or less symbolic, but if I see it fill out and start walking around the room, I'll let you know!

My plans are for a little candlelight dinner here at the house. I'll be frying a hamburger, then we'll have some canned spinach and apricots. After dinner, I might shower, and naturally she'll have a front row seat for that. Then we could sit on the couch and watch a little TV, or, if nothing good's on, we might just call it an evening. One thing is certain, long before we dose off, I'll be unscrewing the lid ... and ... and ... we'll go from there.

Don't worry, I'll be gentle, no hurried pawing. The biggest thing is that we're both comfortable, and that hopefully we still respect one another in the morning. I'm sure everything will come out well in the end, and that in my glimpses of the highest consciousness I'll be that much closer to the divine. In that sense, I intend to make Swami Masturbananda very happy.

Is it just me or does it look like that jar's fogging up? Just a little?
Posted by dbkundalini at 7:48 PM