My Date With Her Vibratory Essence -- Not So Hot 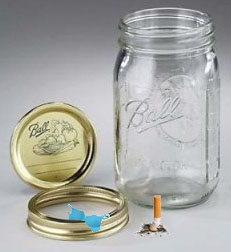 I should've written this this morning. I was a lot more positive about it then, even though I was already pretty bummed. But you get a whole day to think about it and to see the remains of the evening, for me it's depressing.

I was psyched last night for my big date with the vibratory essence (energy) of one of the showgirls from the other night. I definitely went all out, setting the mood with a delicious meal of hamburger, canned spinach, and apricots. I had the gift of a blue bra to offer, which looks like it somehow shrunk from yesterday's picture.

We sat on the couch, me and the jar supposedly storing her essence, and watched TV briefly, until I was so overcome with lust that we made a quick trip to the bathroom, for my shower, then to the bedroom. The purpose in all this, remember, is not simply the satisfaction of lust. The purpose is to glimpse the highest consciousness in those climactic eight to 10 seconds that we're granted. I was thinking -- and this should be obvious -- that the vibratory essence of a showgirl would intensify the experience, and perhaps send me into some inner realm presently reserved for the angels. To me, that's possible, and since it's a religious opinion, no one can dispute it (successfully).

I turned the light down low, then I looked intently at the mason jar and I believed it (she) was looking back at me. Our eyes met -- that's my surmise -- then it was time to strip. I stripped, then unscrewed the jar, that her essence might roam freely, and perform its wanton will on me as it would. The little bra fell to the floor, and I never observed the essence wearing it. But I figured, We're naked, and this just saves me the time it'd take to unfasten those tiny little hooks.

I gazed into the jar from the top and besought her with longing eyes, that she'd emerge forth to take me, perhaps again and again. But there was nothing happening. I held the jar to my ear, but I heard nothing except a very light sound of the sea, like you hear in a shell. I peered in again and saw no movement, no fog, no vapor, no apparition, no movement of any kind, not a creature was stirring, not even, thankfully, a mouse.

But not being one to give up easily, I poured what I hoped was this sexy young thang's vital vibratory energy all over me, then, in the Swami Masturbananda tradition, it was a short journey from hither to thither. Finally, I rested from my labors. In those few seconds, eight to 10, I did glimpse something heavenly, something of the greater consciousness, but then it was over. And what I had laying there, cold up against my leg, was an empty jar, and about a foot away, a two piece gold lid.

This is where it gets depressing, because I went so fast from ecstasy to the pits of despair. Not only was it all over, but I suddenly allowed my thoughts on the jars and the vibratory essence to face hard reason. The thought was suddenly inescapable, that I was very much alone, and that the jar had been empty of vibratory energy all along. That, after I'd wasted good money on spinach, apricots, and the little bra...

So where does this leave me? I'll be working through my theories again, factoring in this important experience and what I've learned, trying to see what might be done to rescue the whole works. Because remember, I've still got 23 jars to go. And if they're all empty, I may have a fairly decent time 23 times in a row, but it won't be all I hoped for.
Posted by dbkundalini at 8:07 PM