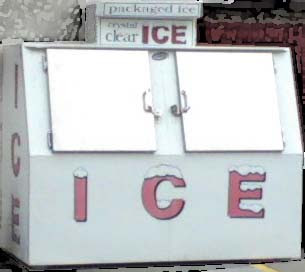 First, the bad news: I'm not going to be writing about ice machines everyday, as popular as I know that'd be. The idea appeals to me, too, but it'd be such a monumental task, all the traveling, the research, etc. It's a lot easier to just make a few incidental remarks about ice machines in general than it is to have to really know a lot about them, their specs, information on the manufacturers, the history of them, and so forth.

Still, if I'm going to be the kind of fanatic and expert on them that will get me a sure booking on the Travel Channel, it wouldn't hurt occasionally to look like I'm at least going through the motions. So I'll be doing a post every once in a while on the subject, and, just between you and me, I'll probably be inflating some of this stuff, like the number of ice machines I've actually visited. At first I was thinking I'd need to visit 12,000 of them to be a qualified expert. But now I'm thinking I can just count each one as 100, because there's so many of the same kind.

So guess what ... yesterday I visited 200 ice machines, and I have pictures from both of them! That's a lot of driving to get to 200 ice machines, believe me. You get out of the car, go over and check it out, get back in the car and rush off to the next one. And since you see them everywhere, every convenience store, every liquor store, and lots of grocery stores, there's a lot of stop and go driving. It's kind of boring really.

I got a pretty good picture of one of them, seen above. (Let me say, I'm referring to these as "ice machines," but that might be an inaccurate term. I really don't know what's going on inside. But they're more or less just big freezers storing ice that some guy put in them, aren't they? The machine part, if that's the right term, would just be the mechanical apparatus keeping the freezer working. But I'm going to keep calling them ice machines, since I've already started.)

The picture shows an ice machine model that seems to be pretty common, a double whammy, and I saw 200 of them just today alone, so that's an awesome statistic. All this time, having been a guy who hasn't paid attention to ice machines, I thought they were all single whammies, like the one they discovered on Mars a couple years back. Single whammies are what I seem to recall from when I was a kid. But, clearly, these days they're going for the double wides.

The big advantage, I'm guessing, to the double wides is that they can stock twice as much ice, meaning it won't run out until the delivery guy gets back, who now shows up only half as often. I was wondering today what they call the double wide machines -- I've been calling them double wides, double whammies, the twins, or just a double. When they break down, I was guessing they're probably called double trouble or terrible twins...

As is seen in the picture, the machine makes a nice presentation. The white color is very clean. This particular design goes way back, so it's built up a lot of goodwill among the buying public. Everyone knows this machine is going to have ice that you won't be ashamed to use. Again, personally I would prefer the single, since that's what I grew up with. The doubles have about twice the size of what I'd like to see. But I don't object to the double on any moral grounds, nor would I have any big objection to buying ice from one, if I bought ice, which I don't usually. I bought some for a picnic years ago, but that's it. Even so, I'd rather buy it from a single, but that's just me. I'm wondering if the demand is really that great, or could it be the ice man is simply greedy?

Be that as it may, at least it's not a triple or a quadruple, so we can be thankful it's only a double.

I'm glad I took the picture of this machine when I did. Because, you might not believe this, my phone went on the fritz soon afterward. For the last few months my camera has been adding a green, weird effect to all pictures. But a week or so ago it started working right again. Then today, a little while after I took the picture above of the first 100 machines, it quit working again.

Evening came and I was out, and I thought I may as well get another 100 under my belt, so I took this closeup of a machine. I wanted to just get the ICE part from the top as a closeup. It wasn't till I got home, then, that I noticed the camera had crapped out again. Those aren't the true colors of the sign. I didn't check it while I was there, because I was worried that the store manager might be wondering why a guy was taking pictures of his ice machine. That's what I thought about the first one I took, too. Since video cameras are extensively in use, there's videos of me taking pictures of ice machines 200 times today alone! After a while, you'd think they'll start wondering what's up with this guy? And maybe the police will set me down for some very earnest questioning.

While I was driving today looking at ice machines, I had a fantasy about some characters from the original Adventures of Superman show from the '50s. 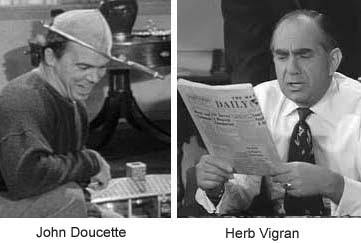 In this fantasy scene, Herb Vigran is of course the boss and John Doucette is the underling, and they're breaking into someone's home to steal a bunch of jewels.

Herb Vigran, in his stern, hard voice says, "I wonder where they keep the ice." John Doucette, in his goofiest voice, replies, "Uh, I think they keep it in the freezer, boss." Herb: "Not that ice, Stupid!" John suddenly remembers why they're there and says, "Oh yeah, the ice!"
Posted by dbkundalini at 4:34 AM