Body Language With The Pink Professor 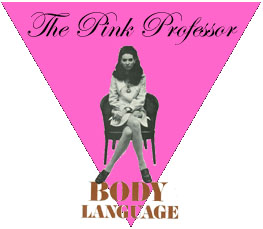 Sometimes you just know it's right.

Every once in a while, if you're lucky -- maybe just once in your life -- you find you're completely in sync, sympatico, with another person. She or he gives you a look and you know what it means. Then you return the same look, or maybe you mix it up with an entirely different look, and the meaning again is clear.

I guess I really stumbled on to something back in September when I visited the Roadhouse bikers bar on a daring lark. Because I met someone that night who turned out to be very special to me. I really didn't go there to get lucky. Why would I? I refuse to touch anything if I don't know where it's been. But over the last few months, you know, with a little eye contact here, a pat on the shoulder there, a tender moment or two, a few huge belly laughs, a knowing glance across the room, a deepening trust, some parallels in our interests with enough divergences to keep it interesting, and even a bumping of heads a couple times, things have developed nicely.

In the meantime, I've learned the Pink Professor's given name, which I need to keep confidential for the time being. For all the things he's not paranoid about, of course there has to be something he is, and the internet is one of them. When I first met him, in fact, I needed to talk about him only in hypothetical terms because I didn't have the clearance to even declare him as an actual person. And I honored that. But things have advanced on for us ... now he knows my name and I know his!

He asked me if I wanted to come over to his place, which I knew would probably be desirable on multiple levels. We might have a couple drinks, sit on the couch, spend some time looking at books, watch Rachel Maddow, whom we both love, enjoy some crackers and cheese, listen to music, and talk. So I've been over a time or two, and he's super cool. We're getting closer all the time, which is a real joy to me. That was part of the whole thing about me renouncing violence the other day, something he encouraged.

Last night I was over at his place. And I tried something a little different when I got there. I immediately put my finger to my lips when he opened the door, and he got the message. That's how sympatico we are. Of course what I was trying to say was, 'Let's not say anything, OK? Let's just enjoy some peace and quiet.' He put his hands up, as if to say, 'I'm amenable to anything you suggest. It's cool with me.' I put my hand to my chest, indicating myself, and motioned toward the couch, which he understood. He directed me over and he took the easy chair on the other side of the coffee table.

The Pink Professor lifted his right hand and dropped it in an inquiring way, as if to ask, 'So what's going on?' I put both my hands up in the gesture that says, 'Quite a bit. I'm overwhelmed, you know, the holidays..." He smiled and made a sweeping gesture upwards, as if to say, "Santa Claus will be here before you know it and it'll all be over!" I wiped my forehead, as if to say, "I hope you're right!"

We sat and visited like that for a while. Then I picked up a pillow and hugged it tight to myself and closed my eyes. He must've read my mind, because when I opened my eyes, he was standing there and pointed to the couch. I touched the seat and he sat next to me. He patted my leg, then went to get the drinks and crackers and cheese and returned. I fed him a cracker ... and he reciprocated. Plus, we clinked glasses.

To make a long story short, we didn't go to the Roadhouse, leaving them -- I don't know -- probably at their wits' end.
Posted by dbkundalini at 5:51 PM