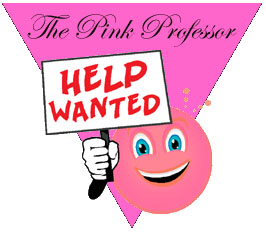 A month ago I wrote about the need biker bars have for a Pink Professor-type of guy in their midst. I just reread my post, and I had to say 'Amen' to everything I wrote. It was way back in November, so I might've easily changed my mind, but I didn't.

The truth is, I think about the Pink Professor a lot ... I mean a lot. Of course I see him when I'm out at the Roadhouse. I walk in, and even though the guys are getting used to me, he always comes over and takes me under his wing. It lets the other guys know I'm all right despite any appearances to the contrary.

And another truth I may as well put out, just to be honest, is that I myself might take on the role of Pink Professor at one of the other competing biker bars. But what I want to do -- just to be on the safe side -- is hang out with the Pink Professor I know, even though he keeps encouraging me to do it. I actually believe I intuitively know the whole psychology of what's going on in the Pink Professor/bikers relationship -- I can grasp it in a flash, not meaning to brag -- but there's a side of me that's reticent to just launch out on my own. So I'm putting it off for a while, which I'm not proud of but that's just the way I feel right now.

OK, if I jumped in, that would almost cover our town. That'd get the majority of the biker bars, since there's only three. And frankly, I don't know what the third is doing. Maybe they have a Pink Professor; I have to confess some ignorance on this, being fairly new to the scene myself. I'd have a hard time just going there, even though I did that at the Roadhog Roadhouse the first time on a daring lark. Every eye was trained on me as I made my way to a table. Even guys who were chalking their pool cues took a break. One of the waitresses came over to take my order, and I was careful not to glance down at her cleavage, knowing that at any minute they might twist some handlebars around my neck.

That's when I met the Pink Professor. The above account of that night is different from the first time I gave it because I didn't have sufficient clearance at the time to talk about him except in the most hypothetical terms, and also because I'm not always that consistent in recalling the past. I'm a truthful person in many respects, but sometimes I too can blow it.

Anyway, I love the guy. He's there at the bar. He's good to new people who come in. He's good for the culture of the bar, because of new blood welcomed by him, and because of the softening influence he has on the existing clientele. And that's what I was getting into way back in November, how rough is distinguished by soft or nice, and how it's also softened up in a way that makes the bikers lovable in multiple ways. They are lovable, but let's face it, they also could kill you. A Pink Professor is literally a lifesaver!

Now, even though we've almost got my town covered, that doesn't mean your town is. Maybe it is, because of course our Pink Professor isn't the only one. But it's more likely that the biker bars in your town are still wanting for one. There's plenty of Pink Professors, I don't doubt that, whether they're in academia or just intelligent, softer guys sitting at home next to their bookcase. But they don't always know what's going on with bikers bars and the need they have. I'm just hoping this post will be read by a few of them, so they'll get busy at least looking at the opportunities.

I guess I could call this "The Pink Professor Project," for lack of a better name. I might write to colleges, particularly to humanities or music departments, something like that, to see if I can get up some interest and raise their consciousness about it. And of course I'll give them a word of warning. When they go out nosing around one of the bikers bars in their area, they'll have to ease into it. But if they're the Pink Professor type we're needing, they'll know all that by intuition. Hey, that's a message to me myself! I don't really need to be reticent, since if I'm the type, I'll know how to ease into a P.P. situation of my own ... I'll have to think about that!

It's my belief, and I share this with our Pink Professor, that we'll have better bikers bars if we have more Pink Professors. We're aiming for one at each. So if you think you've got what it takes, you don't need to write to me about it, there's no one to call, and no resumes are necessary. Just check out one of the bars in your area, ease in, and make inquiries. If they already have a P.P., he'll greet you and kindly let you know. If they don't, that's the place you can make your home.
Posted by dbkundalini at 8:31 PM