Defending Myself With A Crowbar 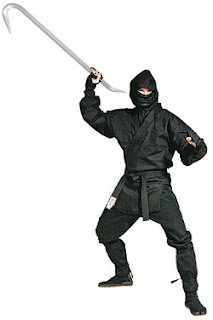 At this point, I feel I'm not guaranteed a Happy New Year until I flush out the guy who trained the secret camera on me. Because there's no telling what else he might try. Maybe he's busy even now with some surveillance equipment that I haven't yet seen.

It was a bummer of a Christmas and now the aftermath has been very down as well. Because I've been busy, I haven't taken this lying down. In fact, I've had very little rest since I found the camera, as I've kept a lonely vigil at all hours hoping to catch the guy. And not just catch him, but whack him with my crowbar.

The other day I renounced violence, and having done so, I took my arsenal of guns to the pawn shop. I figured that move would come back to haunt me, I just didn't know it'd be so soon. Now I'm without the kind of defense that is a defense. All I've got is this crowbar, plus of course any other rudimentary weapons I might marshal, kitchen knives, wet towels, and rocks from the road. Wet towels? Yes, if he's naked, I'll snap him in the butt. That always hurts.

Needless to say, since it would've been the headline if I'd caught him, I haven't seen the guy. It makes me thing one of several things: Maybe the camera was rigged to transmit or upload the pictures back to him. Or maybe he simply reads my blog, which was my theory in the first place, and knows I've got possession of the camera. In which case I won't see him coming back for it. And now that he knows that I'm waiting with a crowbar, everything might be defused ... till next time.

But I have been watching and waiting, very patiently. There's a little side place on the porch, and it can be very dark in there. I've been hanging out there, waiting in the darkness, just me and my crowbar. I've done everything a man can reasonably do with a crowbar. I've had it over my shoulder, resting at my leg, over my lap, and I've lifted it a few times. It turned out to be a bunch of false alarms, including dogs that were cutting through the yard, and one little kid who was selling candy for school. I don't suppose I'll see him at my door again anytime soon. But there was an upside to it: He dropped a box of chocolate bars, so I've been eating them. Plus there's a $2 off coupon for Pizza Hut on each one.

But there hasn't been any sign of the guy looking for the camera. I was halfway expecting him to show up, such as in the guise of a cable guy, a telephone repairman, or even an Avon lady. The last one, I'd love to see, just to see how well he could pull it off. A little gender bending is a great thing, I believe. I wouldn't hold it against him, I want to say, except I would still want to beat the crap out of him, only for other reasons. First, I would demand that he tell me what his mission was, if he was working for anyone else, and if there were any good deals on perfume, especially the kind (Skin So Soft) that keeps mosquitoes away.

So I've passed some hours at my post. And I haven't been in hiding the whole time. I was taking swings at the air, trying to see what kind of whoosh I could get. And a few times I took batting practice with the crowbar and some dirt clods. It's great to see them explode when I hit them. I also hit some good sized gravel off the road, and a few of them sailed pretty far. But they're a lot harder to hit with a crowbar than, say, a baseball bar. Still, there's ways of getting better accuracy. I always have theories about that, mostly variations on positive thinking teachings. If you think you're going to hit it -- it's like letting the Force be your guide -- you have a better chance of doing so. You just don't want to think about it too much.

I came in to write this, and to warm my fingers. A crowbar is a great conductor of cold. The cold air hits it and goes right through it. It cools off faster than an aluminum can in the freezer, or just about that fast.

Where you at, dude? What did you want? What was the camera for? Were you trying to get some dirt on me? Come back over for a few minutes, please...
Posted by dbkundalini at 10:10 PM