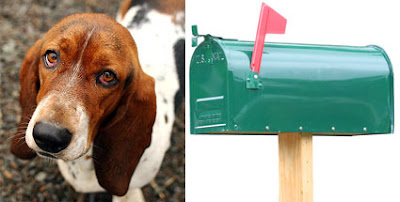 Two and a half years ago, I had a post on Old Cars and Dogs' Heads. I seem to remember I made a lot of good points on the similarities there. Well, today, finally, I'm back, this time on mailboxes and dogs' heads.

With some breeds of dogs, I just can't get over the lazy old shape of their heads. If there's really such thing as intelligent design, they were clearly designed with someone whose own head was stuck in the '40s. Or earlier. You figure, though, it's a head; it's going to have the basic design of most other heads, the eyes, mouth, nose, etc. But that still doesn't answer the question about the lazy drooping look, the curvature being just the way it is.

In the picture of the hound dog above, you might try to say it's the big floppy ears that give it that distinctive '40s look. But cover up the ears and you can see it's still there. In this case, the eyes don't help; they're adding to the dog's forlorn, lazy look. So what are we left with? A hopelessly old fashioned looking head, and, frankly, a body to match. They really do look like old cars, like I said a couple years ago.

In the case of cars, the styles change, although we've had that dopey looking PT Cruiser that was popular with some people, no one with any taste. Probably owners of old sleeping hound dogs. Fortunately, they've now quit making the PT Cruiser. My biggest hope is that all the remaining ones will be junked out very soon. Maybe dogs, if they were attuned to any of this, would hope the PT Cruiser would stay around, since it makes them less conspicuous.

The styles of cars, for the most part, have changed over the years. And you could say the same thing for mailboxes, although to a much lesser extent. I've seen all kinds of mailboxes, stylish ones, homemade ones, silly ones, novelty ones -- like a big fish -- and every conceivable design, really, both by the road and attached to people's houses. But despite a wide variety, the basic mailbox you see to this day is the same one they've had forever, the rounded, dumb looking thing that we're all familiar with. Like Dennis Quaid in "Vacation."

I think it's kind of amazing that this ugly design has held the field for so long. But none of the others has come close to displacing it. Just look at the thing. What could look dopier than that? But we can't get rid of it. People buy a new car every couple years, but they keep their mailbox forever. You drive through the rich part of town and you never see the same car twice, they've got lawn care guys always pulling up the old flowers and putting in new, and they reshingle their house twice a month on a fixed schedule. But the old mailbox will be there till they die and beyond.

Look at it. You tell me. Does that look like an old hound dog's head or not? It sure does! They can shine it up and spiff it up all they want, there's no masking its basic shape. Rounded, old fashioned, not only like a dog's head but also like one of those stupid hats stupid guys wear with the ear flaps.

Dogs can't help what shape their heads are, I understand that. God bless 'em. It doesn't really bother me all that much, because I know it's a natural shape, and God presumably doesn't make mistakes. But that's no excuse for these mailboxes dominating the market for centuries at a time. There's nothing divinely appointed about mailboxes, insofar as I know.

I'm keeping my eye out for newer and better mailboxes, and I hope I see some real soon. And I'm also keeping my eye out for these hound dogs and their weird shape. I hope I don't see very many of them because that would get old fast. But it wouldn't hurt me to see a few every once in a while so I can keep thinking of what else resembles them.
Posted by dbkundalini at 4:34 AM