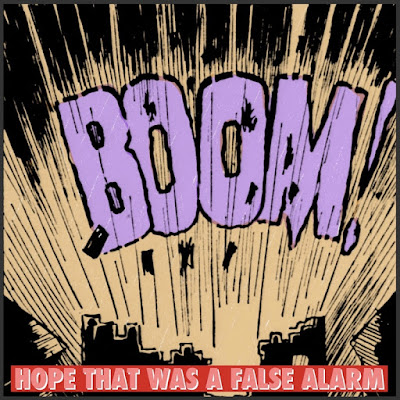 The sky was as empty as the day of creation, barely anything but a thought before The Great Mix-master, seeing nothing mixed up, bore the fruit we came to love, existence. Without fanfare, boom! Just another explosion, apparently -- a few angels went deaf -- although in this case it was the Big One and the damage was done. Existence happened, as we know it, coming into being and simultaneously also passed from being, at least in the mind of its maker. (We exist betwixt the two ends.)

So it was just another day, with the freshly minted sky showing the first word on the horizon -- BOOM! -- and everything appeared to be destruction. But it wasn't. Soon to come, then in a lingering phase, everything was an eyeful and earful, as all things were declared good in relation to nothing at all.

The same sort of thing thing happened just recently, giving us at least this month to suffer our bad fate -- O the joy of preceding generations and the misery of ours! Who knew the miseries we’d be compelled to suffer? I actually could probably come across with numerous “I told you so’s,” but if the lesson wasn’t learned the first time around, it’s unlikely that succeeding generations will know any better either.

Regardless of warnings, regardless of the spot we’re now in, what our destiny is and could’ve been, here we are. As I write this I sit in a cement chair in a thick bunker, itself encased in hardened wood, hoping to expose myself to society again someday and become once again the fount of confidence, spewing hope and grace to all who shall receive. The healing will come, and on that point I am sincere. This too shall pass, my father used to say, and a bright day of new possibilities shall be seen.

Yes, the virus is bad, plaguing the cities, plaguing the countrysides, making a mess of all our surroundings, and nothing can mask the truth. We must abide, though, whether hidden or exposed, perhaps never again to take for granted our lives and aims, until someday when it’s all passed and a new generation -- probably equally as cocksure of themselves -- shall rise and surmount our present fears.

Until then, until the blast has passed, may each of us find ourselves a secure place, apart from the rest, and do our flat-out best to pass the time, surviving, yes, but then, bit by bit, pulling together, to flourish once again! Amen?
Posted by dbkundalini at 6:00 AM