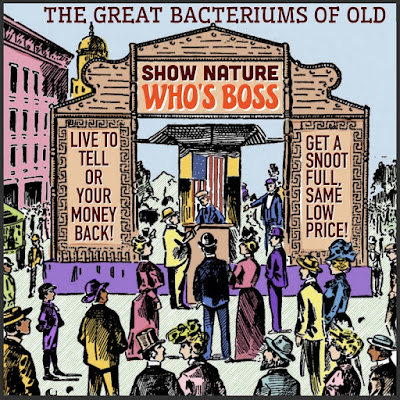 Right up front I need to put out a disclaimer on this one, that, perhaps, what I seem to recall as “The Great Bacteriums of Old” may not have existed. They're telling me that. Yet I seem to remember the elders talking about them when I was a kid. But this other guy I know, whose great grandparents were a prominent fixture in the 1800s supposedly never told their children and their children’s children about such affairs, because this other guy never heard of it.

I’ve been mulling it over, googling to no avail, and I always thought they had such a reliable service, but so far it’s all coming up empty. And yet it just seems to me that my grandfather, who was born in the late 1800s, had said something about something that his grandfather reportedly mentioned in some context, the exact quotation now lost. As I can put it together -- and there are blanks -- I’ve got the syllable “-teriums and the fact that one of my grandfather’s cousins died of bacteria. Poo poo it if you like but it’s ballpark close, close enough to go with.

So there it was. When people were lucky to live into their 30s and would often defer marriage till they were 35 just to be on the safe side, thanks to inheritance issues and whether ladies or guys were marrying each other for their money, they had these bacterium exhibits. With my understanding being that loving couples used these sideshows to settle inheritance issues for their combined wealth, killing two birds with one stone and hoping neither lover would die in the process. But if they did die too soon, you understand, one family would be left destitute and the other family (his) would make off with the loot. A little complicated.

I based my artist’s depiction of the bacterium based on other sideshow exhibits, leaving out, of course, women with stockings up to their thighs because our tastes these days are less carnal than they went with back then. Personally I have no issue with it, but sometimes there’s issue if I view it long enough. Depends on how hot it is, and some of those east European ladies -- thighs as big as a horse’s -- were immediately hot. Our grandpas had it made, making me wonder why all the grandmas I’ve seen, including my own beloved grandmas, had more modern thighs. My family obviously didn’t range far, or have as high of standards when it came to mating. And I guess it’s still that way. I like most things that move.

Imagine though, getting back to the bacteriums, how tough the folks of old were when it came to viruses. They weren’t fooling around. The showed the virus who was boss, and those who weren’t pushy enough, presumably, died. We could draw a certain parallel with today, too, and probably be pretty accurate. Although one of our modern prejudices is not to easily accept responsibility for our problems. But it’s definitely something to think about, how tough we are, and how supposed tough the virus is.
Posted by dbkundalini at 6:00 AM