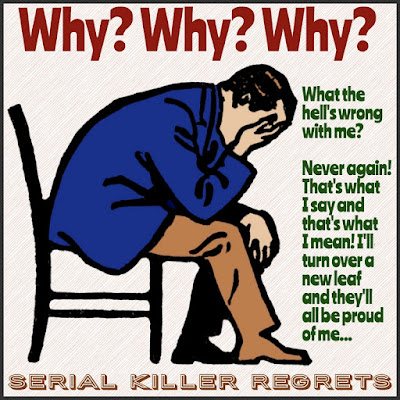 Even now, I could look up online for the basic character and methods of operation that the typical serial killer has or uses. But that would not fit the purposes of this blog, since that’s information anyone could also look up if they’re interested. If you’re the type of person interested in such things, and maybe a little too interested, I will offer a friendly request to you not to try to get to know me. Let’s just part as friends, and not really even friends, two strangers bound to stay that way. I’m happy on my own with my own interests, and the fact that I’m writing this blog doesn’t mean that I have any abiding interest in the subject.

One could, however, well imagine some of the personal distinctions of a serial killer. Whose personalities would no doubt have quite the range, everything from the newbie serial killer, who meant merely to be a one-off killer but it got the best of him and he went too far, to the more hardened hombre, who watches scary movies while laughing, then goes on his rounds much like a plague but with a human purpose and drive. Scary stuff.

The virus is a kind of serial killer, but naturally, insofar as we know, without a purposeful drive to kill. It’s a combination of factors of that which kills coming into contact with that which can be killed. Bacteria, chemical combinations, body parts susceptible to molecular conflicts, a quick-acting or slow-acting agent that attacks without discernible purpose but appears to have but one goal, the complete break down of tissues, sinews, vessels, bells and whistles, and the other body parts that doctors know about but the rest of us are clueless concerning. It’s disgusting at one level -- body parts on the fritz -- naturally, but it’s technically nothing other than the breakdown common to beings with finite life, where eventually one thing or another gets you.

The big difference between our misunderstood friend, the human serial killer, who may have at least fleeting regrets such as “Why? Why? Why?” and nature, is nature has no qualms about doing its thing, regardless of how we feel about it. And probably usually the human serial killer -- being a nasty sort -- is more like nature in that regard.
Posted by dbkundalini at 6:00 AM