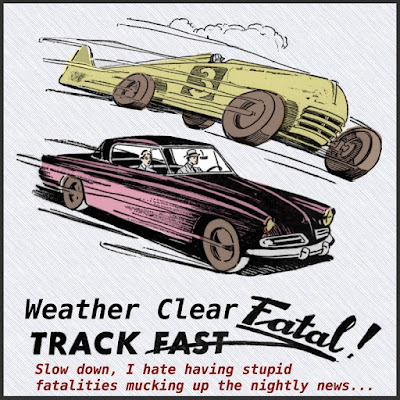 Are you traveling the fatal track? For sure, I hope my trajectory isn’t on the fatal track, although of course we’re all going to die. (This is an unproven statement that still could be false, but don’t bet on it.) I myself have missed many of life’s pitfalls and troubles, and sometimes against all the odds, but I’ve noticed old age is inexorable and when they say, ‘It’s only a matter of time till you’re worm-food,’ I've come to believe them.)

The key thing on the fatal track is just to avoid wrecking as long as you can. Just like driving a car on normal roads. You can be on the interstate and make a fast, drastic right hand turn and take out yourself and any number of other victims, but usually there’s not a good reason to do so, and certainly no great call for it to happen. When I go somewhere, helping friends to the hospital or whatever, I drive responsibly and with the best awareness I have, making sure we make it there safe and the same going back. It's a thing that comes with old age.

But in fact, it always seems like people are intuitive enough even when they're going 70 mph to notice my good example and emulate it right then and there in real time. I can easily imagine them saying, “Wow, that guy’s one heck of a driver. I think I’ll be more like him.” I notice them thinking this and double down on my game, very vigilant with the turn signals, tapping my brakes when called for, and so forth. One of the things I’d absolutely love, and it’ll probably never happen, is for my car insurance agent to just happen to be on the road at the same time, see my carefulness and complete maturity behind the wheel, signal me to the shoulder and cut my rate in half right then and there. These are the things I yearn for.

But there’s plenty of incentives to be a careful driver. If you’re incautious and reckless, you know that if you collide with someone they can sue you for everything you have? We’re always hearing people complaining about the number of lawsuits there are -- and some of them are superfluous, entirely unnecessary -- but I have to concur with legal experts on the validity of most lawsuits when it comes to traffic fatalities. Running someone off the road, squarely colliding with someone pulled over with a flat tire, or even seeing people on the sidewalk and willfully leaving the road to track down and take them out, these are things good people don’t do. And if they sue you down to your last pair of underpants, you deserve it.

Note: I may have gotten a speeding ticket yesterday. I still don't know. The guy had one of those speed guns tracking everyone, and I was at least a smidgen fast.
Posted by dbkundalini at 6:00 AM