The Virus Is An Imp 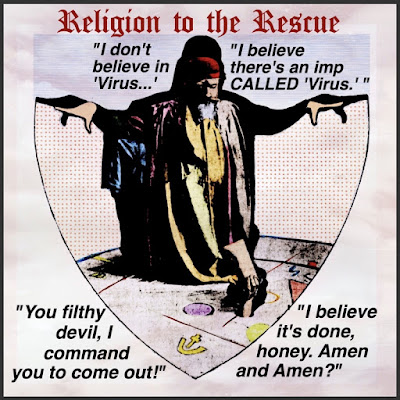 I’ve always been one attracted to those who know what they’re doing, knowing the ins and outs of life and are certain beyond belief, and even expand belief until it's certainty for all. Naturally, I’m talking about religion, where it’s sketched out “In the beginning” blah blah blah all the way to what is revealed at the very tip top pinnacle of the end. Everything's resolved...

The weird thing, actually, is that we know all the stuff from the beginning to the end, but we still maintain, at least fictionally, a little doubt as to how it affects our day to day lives. When, as common sense tells us, if you already have the beginning and the end, all drama should then be gone from the interim bits. If I had anything to do with it, anytime someone came to me with a problem, we’d review the opening, then the end, and the person would be immediately convinced that the interim’s OK.

But as it turns out it’s not always like that. My own suspicion is it can’t be that simple because everyone has to make a living. And what better way to make a living, perpetually, than by allowing doubts to grow up and thrive, and finally see worry ester and spill out everywhere, bearing bitter fruit. So that people are like dry plants in the desert when they should be sprouting and budding, alive with moisture and certain faith and knowledge.

It’s a self-perpetuating machine -- and there’s always room for someone else to jump on -- whereby we could, if only we wanted (and it’s easy to get crowded out if you pose the slightest threat), settle everything once for all in just a few seconds. I tend to see all sides of everything, then choose my answer and keep it to myself. Because I don’t like the threats of entrenched interests, never have, probably never will.

We always think religion is “so good,” that virtue is the default behavior. Big mistake. Every time you hear some guy in the public square calling the whole thing into question, then proposing a simpler understanding, notice how he or she’s always gone the next day. Our quick assumption is that they have such a grand message that they’re wanted in other towns, with a big demand. No, these spiritual vampires against the truth are up late at night, hustling people on to their reward, whether by drowning, stabbing, overloading them with poisons, basically everything except “God bless you.”

But thank goodness there’s still a few who not only understand it but put forth the true doctrine for people’s good, like this one guy I know whose prayers are immediately effective. His teaching is that believing your apparent symptoms is always wrong, positing as he does a never-ending series of “imps,” whom we might think of as devils or germs, but germs with a consciousness. Of course all germs have to eat, but do they have to be gluttons? No they don’t. And when they are, that’s when they need to be confronted and cast out.

His quick prayers are the prayers of power, big enough to end the virus in a heartbeat. Were it not for the others, those whose interests are behind the persistence of evil! They’d milk it forever, whereas my guy, he puts an end to suffering. People arise immediately from their so-called "bed of affliction" and march forward in newness of life. So won't you plan on it? To meet me in a dark alley near here, and bring your best offering, and I’ll turn you on as to this guy's whereabouts. Satisfaction guaranteed or a small portion of your offering will be donated to your favorite charity.
Posted by dbkundalini at 6:00 AM