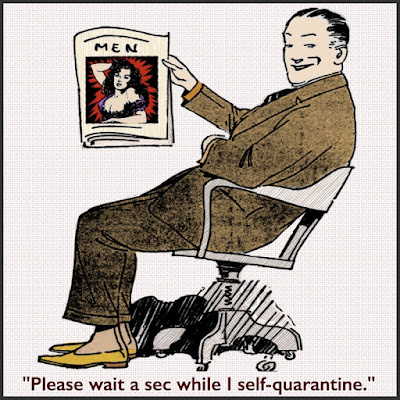 The warnings have been pretty clear, the more we self-quarantine the safer we’ll be. To be alone is safer in the sense of the germs others have not getting on you. That much is common sense. But it’s still up to each of us -- having the virus as a common enemy -- to take care of ourselves while we have a fighting chance.

Of course families have to stick together. Having a family gives the benefit of being able to look after each another, a kind of holding each other to account. I heard it many times growing up, "The family has to stick together." Or as the soldiers used to say, "We need to hang together lest we hang apart." I always heard that, and that's actually one of the biggest reasons I never "served," I didn't want to hang apart. On the battlefield that'd be a lonely death until they came across your carcass one day -- three weeks dead -- hanging apart, and after three whole weeks, very much alone.

In other words, this is serious business. And that’s the way it must be dealt with, 1-2-3, stepping through it, having a certain discipline and sense of perception about the threat. It's no time for half measures or treating such serious business with anything but a serious response. Speaking for those around me, we've taken the serious path, huddling together, watchful for additional threats but for the most part optimistic that we'll make it through. You'd be proud of me. Four months into the pandemic, I got my first face-mask yesterday!

And we've had fun, actually, sheltering in place. I can well imagine such togetherness will have its additional rewards. As, say, nine months from now when the virus has passed and new people will be raised up to replace the old. (None of them will be mine. I knew it'd be tempting so I dipped my undies in wet cement, the fast-setting kind.) But for the others, this is the way of life, holding great promise for tomorrow and -- who knows? -- maybe facing a different virus on a different day. Because if you get one, there could just as easily be another million coming. God forbid, I know.

But not all of us are surrounded by people, friends or family, but instead are alone, the minutes passing slowly as they rouse into defensive posture every time they hear someone passing. "Are the hordes here to steal what’s mine, my toilet paper, my canned soup, or worse, my paper towels? Will they take my life? They may as well. Without my stuff what would I be? Withering on the vine until the grim reaper makes it official, 'He’s dead.'"

Anyway, I meant to say, all this breeding is happening where those equipped to do it are doing it. Meaning we’re just 7 or 8 months away from the dawning of the Q Generation, the Quarantiners in their youth. Their generation marked by the forever compulsion of stocking and restocking, "We never have enough! Take care of yourself with the uttermost caution. Plan way in advance. Anything can happen!"

For those who are about to pass on -- never to see the glorious days of nine months from now, let alone the adulthood of that future generation -- pass me that old copy of “Men.” Even if I'll never be a father, I can dream.
Posted by dbkundalini at 6:00 AM