I'd Leave If I Could 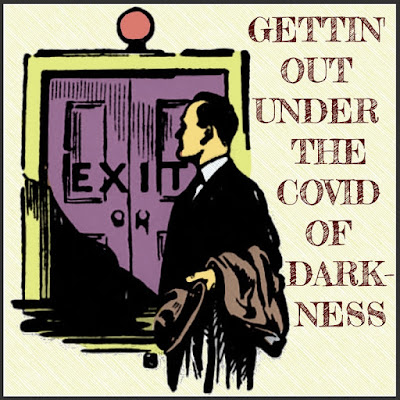 A few years ago I had a life like this, traveling the country, camping, and roughing it. I thought that was the way to go, but, like always, my paranoia got the best of me and I decided to transition out of the more hectic lifestyle into the more sedate life of The Big City.

Of course Grandma’s place was out of the question, as it had been a house in shambles, completely rife with mold, other bacteria, smelly stuff, and rot. Then the City condemned the it and helped me (they insisted on it while still charging me) tear the place down and haul it to the landfill. And believe me, it was tough watching bulldozers cover the last of the place under the soil. The only revenge of the house against them was when one workman was scratched by a rusty nail and ended up losing a toe. You take small victories wherever you find them.

Between the landfill, then, and the Big City, there was that camping/roughing it period. And I should have stuck with it. Because if there’s the slightest trouble -- and say everything else is OK with your truck, camper, health insurance, issues getting your mail, knowing how to file taxes, etc. -- you can always pull up stakes and go somewhere else. In short, any little thing can go wrong and you’re stuck. Stuck? You’re screwed. I don’t know how people do it long-term, although I’ve seen a few who have; they’re just not worrywarts like me. O! if I could do it again, but the money’s all gone...

So now the Big City has to be the focus when it comes to dealing with the virus. We’re crammed in by the millions. I see people walk by my place everyday, people I’ve never seen before. And do they all look healthy? Not by a long shot. It’s painful that there’s so much traffic. At Grandma’s old place, way back when, it was at the edge of town there weren't 20 people walking by in a month. There’s 20 or more an hour in the Big City. But where they’re going? I don’t know. I keep thinking I should follow them and find out. But I’m afraid they’d notice and I’d end up with house guests, which would be certain death.

When I was scrounging for aluminum cans a couple years ago I met a guy and talked to him. He invited me on his porch to visit and get some cans and so I did. Then he told me, with trepidation, never step on his property unless he was there and invited me. Because his son is totally crazy and would kill me just-like-that. I still drive by that guy’s house and wonder about his son. Is he watching, is he waiting? Big deal, his loss! The chances that I’d stop there now even if the dad WERE home are zero. I don’t know what the son looks like, but he about has to be huge and ugly.

OK then, here I sit, with all the dangers of the Big City and nowhere to go. Say the virus breaks out in full force: I’m dead. But say it doesn’t, say we become the safest place in the world. Then everyone will want to live here, including those with the faintest taint, and then -- because of our great success -- the virus will return and we'll end up dead.
Posted by dbkundalini at 6:00 AM