The Best Urn For Me 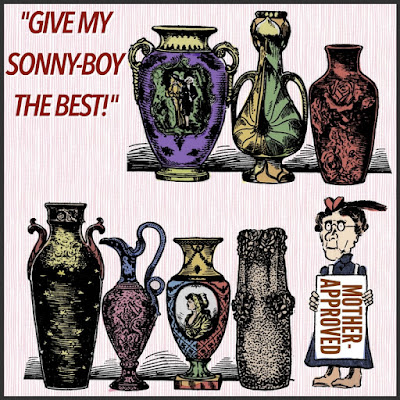 We’re getting near the end of this dreadful series and I just want to dedicate it to the sweetest lady that ever lived, my dear Mother. When it came to ladies, I mean forget about it. She knew all the ins and outs of life and taught me the facts of life. Not just the reproductive stuff -- which has been done to death, Amen? -- but the real lowdown, the real scoop, everything from how to cut the legs out from under the other guy to how to hide the evidence.

You really gotta love her, the mind she had, able to see the details of every scheme without missing a beat. It's with fondness I remember coming home from school one day and she was on me like a ton of bricks. The teacher caught me copying another kid’s paper and I ended up with a big fat red F for my efforts. Mom was pissed, totally P-offed, and put me in one of those baby chairs where you’re trapped in the middle and encircled by a plastic tray four foot in diameter. Strangely, though, all she did was withheld my dessert, and in its place impressed me with stern eye-to-eye instruction and wisdom. “I have told you and told you, a million times, ‘The getaway is the number one priority, not the loot!”

And that’s a piece of wisdom that was attained at a high cost, missing my desert that night, so I’ve never forgotten. To help my memory, I wrote it on a 3 x 5 card and memorized it, and even swallowed it in case I forget what it said. A cough, a quick paper towel run over it and it’s good as new: “The getaway is the number one---” and so forth.)

So say I’m getting ready to scheme out a plan, you know, a job, perhaps a swindle, I think about the getaway. Some of the easiest marks in life are guys who think they know it all. Which I love. Pawn shop dealers come to mind. These guys are so cocksure that they know it all, they’re the easiest mark. They make a huge mistake with their feeling of certainty. Naturally I don’t know what their mothers taught them, and how often they’ve swallowed that advice, but it obviously wasn’t the same as mine. They’re probably thinking of the points along the way in scheming -- which generally works -- and not the getaway. I got in, already picturing my getaway and they didn’t know what hit them. I’d love to see what they upchucked. It was probably their mom saying, “The getaway is…” then there’s a gap, where she must have been on the phone and forgot her train of thought, now with the meat-of-the-goody of her advice missing.

Anyway, Mom was great and still lives in me, her richest advice as close as a cough. And I’ll never forget one of her greatest jobs -- she saw the future -- when she swindled a funeral home out of a bunch of urns, our family being quite large. We used the biggest urn for her, then since her getaway was a priority we took out her ashes and scattered them to the four winds. Whoever in the family’s responsible for my ashes, someday, whichever urn's the best, that’s what I’ll have. This might even be coming up, say the Virus gets me.
Posted by dbkundalini at 6:00 AM