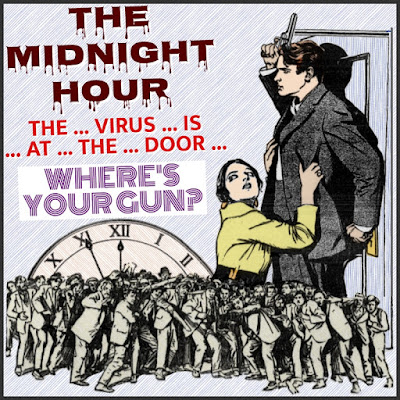 I may have touched on this theme -- my every other thought is on guns and my right to pack heat -- and it may come up again. Because we’re such a gun-happy society. If it threatens us, let’s shoot it, that kind of attitude. It’s long been my argument that we’re better off without so many guns, but, on the other hand, don't take mine. If I needed a gun and didn’t have one, that’d be bad. Even as it is, with the whole rack of guns in the back window of the truck, and those locked, it'd be hard to get one in the event of an actual shootout. But no matter, we had countless societies going back to the Garden of Eden when we didn’t have guns, so who knows. I can well imagine, though, in the old days everyone was a lot more trigger-happy, like back when continental drift was a big thing, they might’ve said, “Pa, the continent’s 5 foot farther out than it was yesterday, where’s the gun?”

With this virus scare, though, who knows? People get desperate and know you have a bottle of aspirin or paper towels or a couple garbage bags and they want it. You cry out, “I have no aspirin!” And one of the mob finds the receipt from yesterday in the garbage. You think fast, “I took them all!” Then they point out the side effects, you would’ve bled to death by now. So the jig’s up. You step out with the gun, your short wife holding you back. You even look at the gun and down at the wife and say something like, “I knew the gun was sawed off, but what happened to YOU?!” (Really, a little height would come in handy against the virus, since it’s my understanding that even germs are subject to gravity.)

Anyway, whether she’s of adequate height, there’s nothing you can do about that when the crisis is plum crazy. Whether she comes to your knees or the top of your shoes, it’s too late to worry about it now. She’s better than nothing, and maybe half the mob will trip over her, although their own lack of height could be such that you’ll both trip over them. The gun goes off and accidentally blows away their leader, they disperse and you’re both saved, which is about the best you can hope for.

They do know something, though, that the virus is no way to die, nothing anyone wants for themselves. And that’s the way it is today. Each one of us, holed away behind our door in our homes, knows that a crowd perplexed can go plain loco if they think you have an edge on survival that’s somehow escaped them. And one thing is certain when it comes to the human race, Without the good sense of some species, giving up when the jig’s up, mankind wants to hold on to survival against all odds, even if it means taking someone else out to do it. Is that the way I’d be? I’d like to say no, no, hell no! But probably, at least maybe. I’d try to do right by everyone, but, I guess so, I might rush your door and take a bullet through the head.

It’s nothing to brag about, naturally, but it’s better to try to save yourself than die like a dog, no offense to them.
Posted by dbkundalini at 6:00 AM