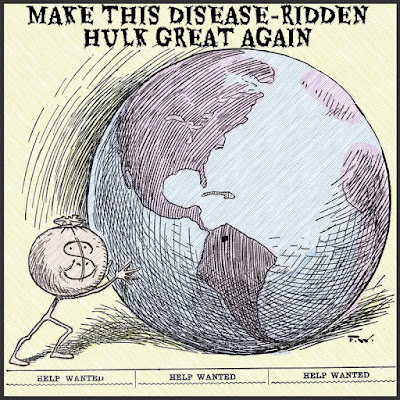 It looks like there’s a lot of work to be done, if we’re up to the challenge. The world’s in a sorry state, it’s gone downhill with a vengeance. Whether by neglect or incompetence or too many bean eaters and not enough bean counters, everything’s gone to hell. I look out the window and of course it looks fine, the same old same old, as usual. But then there’s all those places where I don't happen to be, and unfortunately, due to worldwide communications, I’m able to hear how things are going, which lately has been uniformly terrible.

Certainly we’re having trouble getting people honest enough and hardworking enough to take the reins of leadership and commit themselves to doing a halfway decent job. A lot of halfwits and dumb-asses looking to enjoy the trappings of power, and of course after everything they can grab, instead of acting responsibly to do a good job with any decent ideals in mind. The way to look at it is that the world needs stewardship, good spirits doing a good job for the common good, at least a helping hand, but what we see instead is "Every halfwit for himself!", with the new standard being you’re entitled to everything you can steal and finagle for yourself. If you see it differently, of course you're one of the plunderers, or -- let's say you're not one of the plunderers (fat chance) -- you're at least tempted to put a crowbar through the hardware store window and steal something.

Yeah -- dammit -- it’s really too bad I'm not seeing the kind of pitch-in and help ideals I remember when I was a kid. Say the river overflowed and flooded the baseball field, every kid in town was down there carrying buckets of water back to the river. Then fan-drying the baseball field. Those were the days when you joined the scouts and you got a lot of merit badges. They worked us to death but we loved it. And along the way learned to tie our shoes, recite most of the numbers between 1 and 50, and could build a fire rubbing two sticks or burn ourselves trying. We learned the difference between different fish. And we could pitch a tent. Unfortunately there were a few prima donnas who could also pitch a fit if they were denied a single thing. But the good old days were good. We had a virus back then, we squished it in the dirt.

These days, the virus has some friends in high places, of course the usual crooked ones lining their own pockets from the common purse, all under the cover of being responsible, ha! Yeah, that’s how it is, but they’re not fooling me. I’m just not in much of a position for putting the clamps on 'em. I’d certainly insist on a fair trial, but then once found guilty, you know how it’d go: I'd insist on perfect justice, reparations, and prevention measures for the future. Make an example of the rapscallions and do away with their sort now and forever. And live happily ever after, dealing in the future with viruses (if any) according to wisdom and the common good, all hands on deck, with the usual cast of slimeballs sidelined once and for all.
Posted by dbkundalini at 6:00 AM