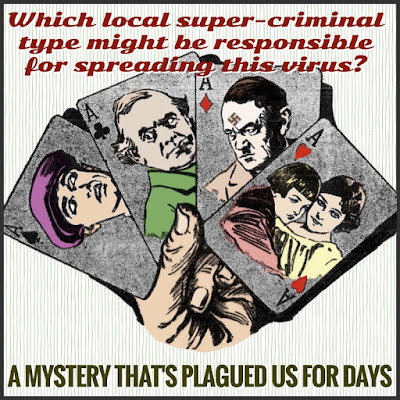 This virus -- are you with me so far? -- is not just happening, OK? That’s a big statement, and probably one I'll get a lot of flak over. I understand that. And I can deal. But I’m just concerned about those out there -- a lot of people -- who won’t deal with it if we don’t take it completely seriously. So I’ll put it out there again, it’s not just happening.

Is it a huge conspiracy? I don’t believe it's that huge. It’s just like this, that in particular localities there are agents -- it’s tough to prove because a lot of these shady characters stay in the shade. But it makes complete sense how these agents are acting. Doing their dirty work (1), then slinking back into the shadows to look out from the shadows and behold the evil fruit of their doings.

And you see how effective their plans are, at least in the short-run. Because we will get them. This is something f I can see it, our leaders can see it, and they'll shut down the whole thing.

So we are indeed looking at local agents and national agents and probably global agents at their filthy task, whoever they might be in the particular places. It's a lot easier to see in local situations because the networks on the larger scale, while like the local in many ways, have a lot more ways of disappearing, and shifting blame.

And I haven’t merely been sitting here writing this, OK? I’ve been out, particularly at night, listening at doors in alleys, exchanging certain goods for certain information. Then filtering it through the software in my massive VIC-20 brain. It takes a lot of doing, but I've got all the time in the world (to do good).

So far, then, I’ve narrowed the local scene down to four agents, perhaps one of whom is the biggest threat, while taking into account that if they're in cahoots they’re even more powerful. I’m going to sketch them out with the helpful apparatus of four aces, and we’ll be going the typical left to right in the all important list of their identities and motives. First, we have the town drunk, Skidrow Sal. There’s nothing that’s not observed by Sal. Sal sees the weak links in every scene and gets his booze by reporting to Mr. or Ms. Big.

Second, there’s furniture store owner Martin Van Bureau. Who's really the point man on information, very useful in the ‘hood. It seems that Bureau has run up quite an electronics bill for eavesdropping equipment; he shut down the last few electronic stores in the area. If you’ve said anything about anything, or have bought furniture in the last few weeks, Bureau has you pegged.

Third, we can't leave out the owner of the Third Reich Bar, Alois Himmler, aka “Big Al,” who started out a WWII re-enactor but is now head of the local Nazi protectors. Not only is there a lot in it for him, the virus, the virus is this ace’s ace in the hole.

And lastly, we can't leave out Baby Face Walter and his child bride Lucinda. Baby Face isn’t just a baby in the face, but baby all over, wiry, slippery, able to show up unnoticed, always keeping his crying down lest he be caught. With Lucinda satisfying him continually, his mind is completely free of carnality, making him a super computer of information.

So there we have it. Sal and Bureau have their necessary role in this cabal, but it’s Himmler, virtually bottle-fed by Baby, who’s the number one purveyor of the virus. I’d say bring the pillars and walls down around Himmler and we’ll finally catch a break, spelling the last days for his viral reign of terror.
Posted by dbkundalini at 6:00 AM