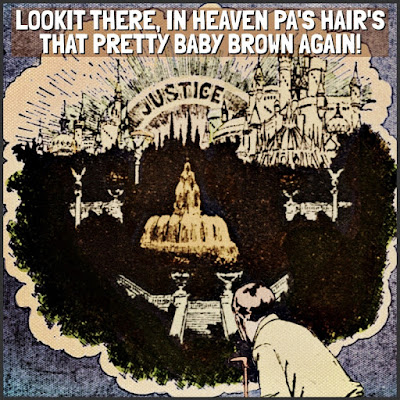 I do a lot of meditation. And I’ve had vivid images of heavenly glory, most of them involving gigantic tables of great food, spread out as far as the eye can see: big roasts, salads with lettuce that doesn't wilt, and of course spaghetti, the most delicious cheap thing you can make. Mostly I see things from when I was a kid, when I was learning about life: Wars, plagues, cleaning fish, Grandpa clearing his throat, Grandma talking flea market dealers down on canes, and of course vivid dreams of Heaven.

The last one, I’d love to have dreams like that now that I’m old, but it just never happens. One of the reasons, probably, and I’ve mentioned it before, is that like Jimi Hendrix I might have a vision and slip into the alpha jerk state and slip into the hole and die before my time. Although, whereas he no doubt had future classic albums that were never made, what have I got? Nothing, just this blog, which, while it’s extremely influential on all seven continents, I'm “just not fed” by the constant acclaim. My time is near.

Still, if I could recapture the glory of my youth, these dreams of Heaven, I think I’d appreciate them now even more. Back then, they were so vivid -- I saw the whole judgment! -- I’d wake up with cold sweats and my mom thought I was peeing the bed. I told her no, I wasn’t, and tried to blame the sweats on God, but, you know moms, the supernatural always escapes them.

The graphic today portrays something of Heaven without quite showing it in its fullest accurate detail. I do concur with the graphic on one point -- and this is a major truth -- there are no broom closets in Heaven. You don't see a single one. So nowhere to hide. The rest, except for nonessential details is basically true. And who’s this I see? Pa! The old man, his cancer a thing of the past, with even his bald head covered with the light brown hair. That’s so good to know, illustrating what is clearly portrayed, Justice, sweet Justice, among the other golden trappings of the grand hallways.

It’s a great vision to have in these days of the virus. That filthy thing, that devilish virus, seen under the microscope in its full hideousness, a lot of jagged edges and tiny little infecting handles, has no place in this grand vision. The fear that people have -- including me, naturally, in my weaker moments, almost 24/7 -- will not be sustained in that vision's fulfillment. The way it brings people low and just outright kills them around the world cannot stand in the grand vision. I see the numbers. And more importantly I can picture in my mind the terror -- again, 24/7 -- and know that it’s no good. Like the cancer that took down Dad. And whatever it was that took down Grandma and Grandpa, heart troubles and miscellaneous, respectively, these filthy devils shall not stand.

Please be encouraged, the comfort and best wishes are real. But if reincarnation turns out to be the afterlife, buckle down next time and set a few goals for the next go-around. Buy paper towels early, toilet paper, cheese, whatever.
Posted by dbkundalini at 6:00 AM