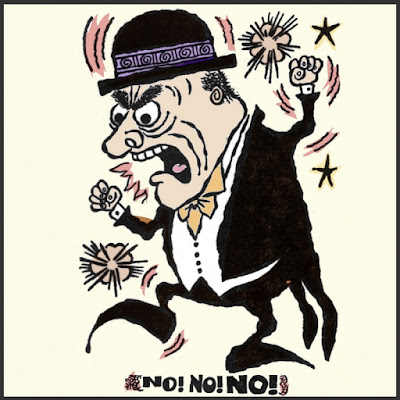 Ha, ha, forgive me, I always chuckle when I see this picture. I had it for my screensaver for about a year and used to see it all the time. I’d go to the kitchen to make a cup of cocoa, then come back and the screensaver would be on, and I'd about spit my pants, dribbling cocoa on them when I sat down. Then I thought, you know what, I'm going to save this pic for the future, like if I ever do a series on something lighthearted, a virus or something. Well, today’s the day!

And we’ve all known someone like him. He has the world's greatest sense of entitlement, by cracky, and if anything or anyone thwarts his expectations, Katie bar the door! He’ll be on you in a flash, like stink on doo doo, barking out complaints, shaking his meaty fists in your direction, and apparently quite the fearsome complainer, with most people easily able to get his way. They see the derby and formal wear and assume he’s among the upper crust, better than you and me. But he knows how life goes; you complain with authority, that’s the biggest secret to getting your way. One day I did it and reduced the clueless clerk at the thrift store to jelly when she didn’t know about the 10% senior discount on dollar books. I was so upset, stomping like this guy, having the 90 cents cash in hand and this clueless clerk -- clueless! -- objected. Terrible stuff.

I also love the stars around him, clouds of dust, lightning, and the various symbols of his contortions, along with enough anger wrinkles to scare his own mother. He shrieks, “No! No! No!” Like “I’m here, I’m the Big Man on Campus, and I’m not taking any crap off anyone!” If I saw him coming -- say I was the thrift store clerk -- I’d pull the old “It’s time to take my break” ruse and put him in his place. Then he’d be like Rumpelstiltskin, so irate he might put his foot through the floor, perhaps breaking his foot, but for sure rolling up a huge bill on getting the floor fixed.

Anyway, picture him as you will. You might see him as the average guy who thinks he has the virus. He goes to the doctor, and they’re all standing back against the wall in full gowns and masks. And he, His Royal Highness, expects them to roll him in for an immediate test. The rest of the waiting room is cowering in the corner, not knowing if they’re more afraid of the virus or the simple fact that he actually could be Rumpelstiltskin. He continues complaining, on and on, and finally the orderlies come to lead him out. They’re immediately stricken by the virus and fall dead. So now it’s serious. They get him to a room and get him cured. But they get the final laugh, not billing his destruction of the floor to insurance but putting it on his tab, every last cent. And hospital floors, like everything else there, are over a thousand dollars!

One helpful note: If you’re going to the hospital with the virus, there’s no benefit in putting on a fancy suit. If fact, if you can find the old winding cloth like they used in the plague in the Middle Ages, they'll truly take your case seriously. First in line or in the back, they will get you in.
Posted by dbkundalini at 6:00 AM