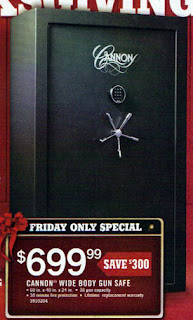 JOVIAL MALE NEWSCASTER -- Mrs. Anderson of the city has a real story to tell!

FEMALE CO-ANCHOR -- That's right, she doesn't own a gun but has repeatedly been the victim of gun thieves.

PIPER -- Mrs. Anderson wouldn't know a Mannlicher-Carcano rifle from a Yamaha tuba, but that hasn't stopped gun thieves from targeting her home. In the last five years, she's been the victim of 10 break-ins, and every time the criminals were looking for guns in her gun safe. But all of them left empty-handed, because Mrs. Anderson has no guns. Why does she have a gun safe?

MRS. ANDERSON ON TAPE -- A few years ago, my husband asked me if I wanted a $700 gun safe, actually the furthest thing from my mind. I thought he was kidding. And when I said yes, I chuckled, and figured he knew I was kidding. Then when I saw a package 6 foot tall under the tree, I started having my doubts.

PIPER -- Her husband indeed gave her the gun safe, and by then what could she say? So there it's been, in her home for the last five years. Somehow then word got out that the Andersons had the safe, with everyone assuming that anyone who had a safe like that would also have some valuable guns. And obviously the wrong kind of people heard it as well. Mrs. Anderson says she was surprised to have so many troubles over the years.

MRS. ANDERSON ON TAPE -- I was surprised when the troubles started, the first break-in. No one was home, we weren't expecting it, and when we got back, there it was, standing wide open, completely pulled out from the wall and scratched.

PIPER -- That was the first break-in, but it was destined not to be the last. Since then, thieves have repeatedly visited the Anderson home, breaking into the safe and continuing to scratch it up, in some cases causing some considerable damage.

MRS. ANDERSON ON TAPE -- This huge scratch, my husband said they must have whacked it with a tire iron trying to get it open.

PIPER -- That's right. Her husband got it for her more or less as a joke. Then when she got it, it took up so much room she needed to use it for something. Actually, what she keeps in it is her collection of vintage Bohemian Santa Clauses, all reproductions, not valuable at all, with only sentimental value. The safe has done its part in a good way, but with the break-ins, a few of the Santas of course have been broken. Piper Klinebeck, reporting for Eyewitness Action 9 News.

FEMALE ANCHOR -- It looks like the lesson for the Andersons is, "Live and learn."

PIPER -- True enough. But there is one sad side note to the story to share. Two years ago, Mr. Anderson was home and tried to prevent the thieves, who unfortunately bludgeoned him to death with one of their tire irons, also again scratching the safe. So it's not all good...

MALE ANCHOR -- That is a sad note to end on. Another lesson would have to be, "Next time, pick more practical gifts."
Posted by dbkundalini at 6:28 PM