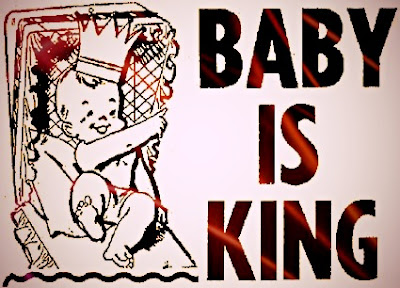 Unto us a son is born, a child is given. The child given, the son born, is your opportunity to adopt my blog posts. Where you can pick up the little tykes, so to speak, that I have written, and care for them and really make them your own. Are you up for that?

This is part of a personal goal I have to make my readers feel more involved and invested. It would be more fulfilling for them, and as far as I'm concerned, I'd get a kick out of it. Just so there's no fighting over any of my "kids." I don't want to have to cut one in half, let's say, to find out the true parent!

At the heart of this idea is the fact that people like to have responsibilities. People want little tasks. It makes them feel useful and a part of the larger whole. Like when we were in school and different ones wanted to clean the chalkboard, or monitor the hall, or taste the teachers' food to make sure it wasn't poisoned. We lost a couple kids that way, but the bright side is they got a full page memorial in the yearbook.

People want to have a part! And so it is with a blog like this one. There's always an upside and a downside. If they aren't included, they drift away. They're always looking for a role to play. That leaves the writer, me, with a couple options. One, do my own selfish thing and let the people drift away. Two, include them, whether in an intrinsic way, like having co-writers, which isn't likely to happen, or get them involved in some other aspect of the blog.

The latter option could of course include nothing more than busy work, like writing me "Attaboy" letters and getting a nice response, but I don't want to go that route. I want it to be something fairly intrinsic without it being entirely so, something just good enough to keep you committed. As they used to say about the canned milk, "Contented cows are happy cows."

So the idea is that my readers will adopt my posts, like Cabbage Patch Kids. Each already has a name, a title. You simply get to know it intimately, kind of nurse it along in the public square, promote it in the world, then sit back and feel the pride of watching it succeed.

You adopt it! It's your "baby!" I would then have a list of the adopters, and periodically send you by email an update on how your baby is doing. If it got 40 visits from around the world, that'd be good. But what if it got 400? What if it just got 4? Of course if it's just 4, you'd have to promote it more!

I haven't got it fully worked out, but we would have to have some rules. Like if you were neglecting your baby, I might have to step in and take it away from you. But I don't really want any unpleasantness to intrude on the relationship at this point. Stay positive, keep everyone smiling!

One of my recent favorites is baby "Fahoup Fahep Fitzguh", a recent child, that could use some tender loving care. It tells the hilarious story of how the rock group came up with that name. I can see how a lot of people would like to adopt "FFF," because it'd be easy to promote a child who's a rock star!

You might want to adopt "The Legend of Paul Boone," from October. This child was an underachiever, but I still think it's got something valuable to say. All it needs is a little TLC, a loving parent to take it under his wing to help it make its way in the world.

Here's a good one that'd make a fun child, "Pitbulls, Sex Offenders, and Jake Brakes." This is the only post I know of that had people on Facebook organized against it. You realize, pitbull owners have no scruples against an angry response, and I was the unfortunate target of their ire. But if you're adventurous and can stand the heat, it'd be a lot of fun to see that post adopted. With that one, though, I'd need a full background check of the parent-applicant, just to make sure the pitbull people don't get their hands on it and kill it.

Go through the list and see if you can find a baby of your own. There could be great benefits in it for you. Like if you're a childless couple, can't have kids, and you're struggling with your marriage. This program might put the spark back in your relationship and give you something truly blessed to share. And one other benefit, it's a lot cheaper than an actual squalling rug rat. You get all the benefits of a child but none of the headaches!

Let's get you started. Leave a comment, telling me which one you want to adopt. And if you think you can handle twins, triplets, or even quadruplets, theoretically you could do that, but the process could also be that much more complicated. Definitely the parent who takes the pitbull post will want to stick with that one alone.
Posted by dbkundalini at 1:29 PM