It's Thanksgiving All Over The World 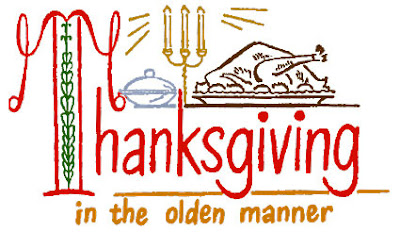 One of the reasons Thanksgiving is so great is it's one of the few holidays that brings the entire world together in a common celebration. Most of the other holidays, while being great, are so much more provincial, Christmas, New Year's, the Super Bowl, and even Arbor Day.

But for at least one day a year -- this day -- we can all be Pilgrims and Indians, recalling the old days. That's what they mean by "Celebrating Thanksgiving in the Olden Manner," that we bridge the years back to the holiday's original spirit.

The fact that Thanksgiving is held in common, and treasured in common, around the globe makes it something so much more special. Because we're truly able to see, much as when we glimpsed the Earth from outer space in the days of the astronauts, that we have one planet and one family, one common humanity.

Thanksgiving of course has a religious significance, as we give thanks to the one true and living God for His rich bounty. It's a day that brings all men together in harmony, even atheists, to reflect on our blessings from above and to yield up the spirit of thankfulness from reflective hearts.

We see Thanksgiving's magic in the micro sense around our own dining room table, with loved ones who won't speak to each other any other day of the year suddenly embracing in tears before enjoying the sumptuous feast. Every divide is bridged!

Abraham Lincoln, one of our best loved presidents, having a special place in the hearts of his countrymen, had it right when he proclaimed what Nature had already dictated, that men everywhere need to and long to give thanks to a beneficent Creator. We are suddenly reminded, as though we could forget, that who we are and what we have is found in that common, ultimate Source.

Lincoln issued the first proclamation long ago, declaring that, "Few will remember or long note what we have said here today." But he was wrong on this point. Indeed, few were present in that small room as the president spoke. But those few took his word to a few more, then those to a few more, and so forth, until the proclamation had touched the entire world.

And so it is today, in places as different as the Ukraine, the Netherlands, Africa, the Congo, Europe, Asia, and, yes, the United States and the Americas, men will sit and break bread, as well as roasted turkeys, and offer up a heartfelt word of "Thanksgiving" to Him who sits on high.

Happy Thanksgiving, world!
Posted by dbkundalini at 8:32 AM