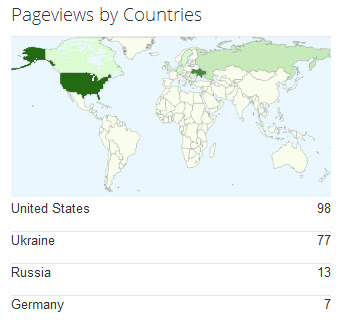 Look at the global reach of my blog this week. (For the graphic, I dropped off all the countries after Germany who aren't keeping up. But they were United Kingdom (7), Malaysia (5), Romania (4), Sweden (3), United Arab Emirates (2), and Canada (2).

What's precisely wrong with Canada, I don't know. Don't they have the internet up there? 2, that's barely one per province. They have provinces up there. They're very provincial. I could go up and teach them a few proverbs, see if they could prove themselves, and dump a little provender on the ground, anything to provoke them. Wake up!

The United Arab Emirates, I'm not sure what that even is. Is that the name of a country? It sounds like a subdivision of a country or a sports team. I suppose they're very into oil. I remember my dad teaching me how to change oil in the car. Over there, it's probably a dime a gallon, so it doesn't cost much for the kids to have someone else do it.

Sweden. I like the Swedes. I knew some Swedes, they made a big deal of the fact that they still knew Swedish after all these years. There was this one old guy, 90-something, and his wife would tell me, "Pete's talking the Swede!" I couldn't understand a thing. And one day I found a bunch of Swedish books. Tried to sell them on eBay but no one wanted them. If only I'd had these three visitors back then!

Romania and Malaysia, I think they're doing very good at 4 and 5. Because the last time I consciously visited a Romanian or Malaysian site, I can't remember when it might've been.

The United Kingdom, they're tied with Germany at 7. I'm a little more disappointed with the UK, which is why I clipped them from the graphic. After all, we share the same language, and I've listened to music from England (the Beatles, Stones, probably others). They need to step it up and read my stuff, or, who knows, I might turn on them, too.

That brings us to the big boys. Russia and Ukraine. Look at that, 13 and 77 from the Ukraine all by itself! Obviously something happened, because I don't remember any spike like that from there before. The thing is, I'm just guessing, one of my posts must have been linked on one of their sites. I can't figure it out, but I've had a number of traffic sources that appear to be Russian gambling sites. And the traffic is all centered on one post of mine from 2009, "Sternness Meets Creampuffness."

I had to look the post over, because I forgot what it was about. It had to do with self-esteem and personal pride, bringing forth strength in your personality. I used wrestling/rasslin' imagery, with Sternness facing Creampuffness (psychological states) and beating the crap, or cream, out of Creampuffness. So my guess is, these Ukrainians are visiting gambling sites that have something to do with wrestling matches, and in there somewhere, this post got linked.

It's still a good message, so I hope they're lingering long enough to be encouraged. Bring forth the stronger sides of your personality, and, seriously, don't let Creampuffness get the upper hand.
Posted by dbkundalini at 10:36 AM