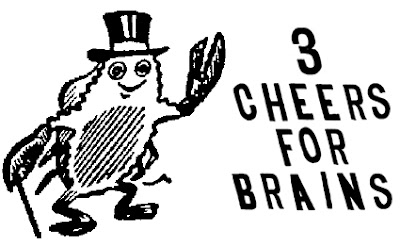 The Wizard of Oz famously said, "Every pusillanimous creature that crawls on the earth or slinks through slimy seas has a brain!"

To which I say, "Hallelujah! Someone finally gets it!" Because I've been saying a version of that for years. And not only about brains but lots of other body parts, too. This realization came to me early on, which, frankly, might not be something a kid would think of today. They're not as close to nature as we were back then, since we were always going fishing and hunting, then cleaning/dressing the fish and other animals.

I'd look at the animals and point it out to my proud dad that a rabbit has two eyes, a nose, ears, etc., just like we do. And I'd do the same for squirrels, deer, dogs, and even fish. Fish are a little different but the same basic body parts and functions are there. When we'd clean fish, it was one of my least favorite things to cut out their digestive track. But I held my nose and did it anyway. And now I'm glad I did, because it made me aware very early in life that fish also excreted waste.

Of course we had pets, mostly dogs. I really learned a lot about life by observing dogs. One, they appeared to have a brain, just like the man said. Then there were all the other things I'd come to expect, including eyes, a nose, and so forth. Now that I'm thinking back, I actually remembering pointing out to someone that dogs had heads and the basic design of their heads were just like ours.

If you want to think of differences in dogs, between them and us, look where their nipples are. If we were built like that, our nipples would have to be near our waistline! Thankfully it's not that way! Imagine what it'd do for cleavage! The thing about dogs in this regard, though, speaking in practical terms, with evolution in mind, is that they generally have multiple young. So they adapted, the ones with nipples where the young could get to them tending to pass on their genes. Thankfully, they found a happy medium, i.e., where they're located now, since clearly they were running out of room, stopping just shy of the genitals.

I'm sure glad I have a brain. I use it all the time, really for everything. There's not a day goes by that I'm not using it. But I still don't know how to spell pusillanimous without looking it up. Although, since I'm a man, I can come a lot closer than every pusillanimous creature that crawls on the earth or slinks through slimy seas, which also, regardless of their inability to spell, still have brains.
Posted by dbkundalini at 6:06 PM