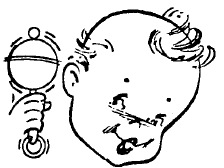 The imaginary stud is a guy whose eyes perk up when he sees a woman walking by with a baby. "Hide me," he says, because he doesn't want the mother of the child to see him.

Except you keep going down the road and eventually see a woman pushing a stroller built for two. "Hide me," he says, quickly averting his face, because two kids, that's so much worse. If she sees him, knowing he hasn't paid whatever child support he would be obligated to pay, he's going to be in big trouble.

You keep going. The imaginary stud is wiping the sweat away from his brow, so much so that the tissue (or cloth) is wringing wet. And he's checking out some of the sweet femininas swinging their hips down the sidewalk. These are some of this thoughts: "Ooo, mama! Look at the butt on that one!" and "Yesss! Come to papa!" And, "I'll take a piece of that ... right now!"

He's in a state of agitation even if you can't see it, because, let's face it, he's socialized (civilized) to a certain extent, and able to keep his pants on and pass by undetected in ordinary circumstances. In other words, we're not talking about Herman Cain, although the guy of our story is still potentially an actual stud.

He is definitely an "imaginary" stud, because, look, he can't physically be the father of every baby in every stroller! There's others out there being the bull in most of these cases. But who knows, maybe he's gotten lucky a time or two -- after some especially wild drunks -- and you never can tell whose kid may be whose! Even if twins, triplets, or quadruplets don't run in his family, there's no way of absolutely excluding the possibility; they could be his!

Speaking of triplets, that's the next group we pass. The mom looks like she might be overwhelmed, because a stroller built for three is rare, and yet there she is, the proud (maybe not) pusher of three. A boy, a girl, and another boy, just to give an example of what we might see were we to stop and look inside. But the proud papa, the imaginary stud, won't be looking that closely, averting his eyes and face: "Hide me," he says, himself overwhelmed, thinking maybe he actually does know her. What a life of drudgery and expense! Diapers for three!

The only thing worse than that .... for our possible papa .... is an even more unusual sight, a woman pushing a stroller with four babies. Four? That's an entire litter! Now we're talking some severe fertility drugs! Something's made nature go haywire! The imaginary stud isn't ready for that kind of commitment! He's barely able to support himself! Still, he did the crime, why shouldn't he be doing the time?

If indeed he did it.
Posted by dbkundalini at 10:26 AM