Why The Old Vets Are So Quiet 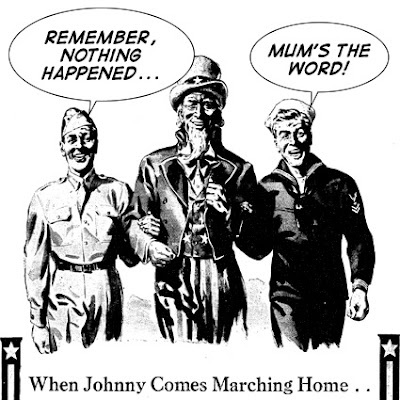 WW II veterans are dying off at a staggering rate, and they're about gone. So any light the remaining ones could shed on this issue would be helpful, both for the historical record and for their peace of mind at having come clean. My word to them would be, Any vow of silence you made to your brothers in arms, surely you have kept up your end of the bargain. They're gone, but you remain. Bygones being bygones, come clean already!

You ever notice how quiet WW II vets have always been about their time away? I've known quite a few and except for one lone exception, I've never known any to recount their sexual exploits. The one exception told me just the barest bones story, some generalized experience he had with at least one prostitute. The details, alas, were lacking, and at that time I didn't have the same resolve as now in getting to the bottom of it.

As for the rest, maybe they were embarrassed to discuss something that is admittedly best left unsaid. Or perhaps they wanted to keep up a front in the presence of wives, girlfriends, and mothers that they had maintained their innocence. We could give them the benefit of the doubt and say veterans have historically been quiet about what they did in wars. But what if this is exactly the reason why! That they were having crazy sex, whether in ancient times or more recently, and simply didn't want to come clean!

The ones we've known, many of them, have gladly bragged about everything else, their boat, car, and family. It's kind of weird that they wouldn't be telling us everything they did in the war. But people think they're just reluctant because of the trauma, the life/death issues, all too deep for words. Balderdash! If you're a survivor, you're going to crow about it, unless there's a good reason not to, like covering up sex.

I'd like to get the confidence of a few of them, although with age it's getting harder and harder. They can always pretend to be deaf or out of it. But say I did. Say I had five of them at a table, and they think it's finally OK to talk about how many guys they killed. They're going on and on and I'm such an encouraging presence. Then I lay on them, "What'd you do for sex?" Suddenly they clam up, so we all know!

That's what it's always been. To disguise the real root of their silence, they chose to be silent on the whole war experience. All this time they were just bustin' to tell us how many guys they killed, and all the rest, but had they dared, inevitably mom and grandma and girlfriend and wife would've known. Because they'd have to go suddenly quiet when we turned to sex.

In a way, it's a tragedy. They came home as victors but had to carry a guilty conscience for decades. Their complexes grew and grew and eventually took over, to the point that they wouldn't have been able to say anything about it if they wanted. Finally, for the ones who died, they look up, see the lights of glory and mistake them for the red lights of a house in France; in their mind, they're suddenly 19, their face lights up, and they die with a smile.
Posted by dbkundalini at 1:32 PM